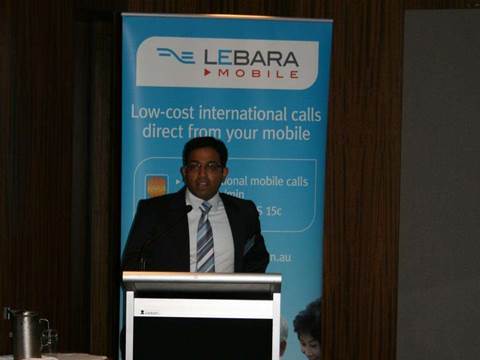 Lebara Mobile plans to offer free on-net international calls on its mobile virtual network to Aussies in Q3 of this year, its UK-based chief said at its local launch today.

The company this morning confirmed earlier speculation on Whirlpool that it would enter the Australian market by establishing offices in North Sydney and putting on some 40 staff, including 18 call centre agents.

Although surprised to learn that word of the impending launch had leaked so early, chief executive Yoganathan Ratheesan said the launch plans were known mostly to a select few and by an internal codename, ‘Barbecue'.

He declined to reveal details of business plans, expectations, estimated revenues or customer acquisition targets, other than to announce that Lebara will use Vodafone Australia's network for its local infrastructure.

The operator holds separate agreements with Vodafone in Spain and the UK, but Ratheesan told iTnews that agreements in multiple geographies wouldn't afford it preferential treatment or wholesale pricing.

It did not approach any other network providers in Australia to negotiate wholesale capacity and carriage, Ratheesan said.

Ratheesan said Lebara also plans to offer free on-network calls between other Lebara users globally by Q3 of this year.

"We used to use the mobile operator's platforms for on-net calls but as we expanded we decided to invest in our own intelligent network (IN) platform," Ratheesan said.

"If you work with multiple operators [globally] you can't make country-to-country on-net calls possible unless you have a centralised platform."

The offer could also give the likes of Skype and other VoIP providers a run for their money, in addition to the calling card players that Lebara usually competes with - although Ratheesan didn't see VoIP as a threat.

"The assumption of VoIP providers being cheap is completely misleading from my point of view," he said.

"Also, for a VoIP provider you need an Internet line and PC [or other access device] on both sides. It makes it very difficult within our target segment [of the market] to put that asset requirement on them in the first place."

It said Australia has around 4.9 million foreign-born residents, creating a large market opportunity for a service that could guarantee quality-of-service at levels higher than calling cards.

Ratheesan said Lebara would concentrate on establishing distribution and retail channels for its prepaid SIMs. It has an existing arrangement with e-pay for distribution of electronic vouchers, but will also look to set more concrete channels with particularly retail partners.

"Initially we discussed leveraging Vodafone's retail channel locally but our focus is really on establishing our own distribution channels," Ratheesan said.

He said the company would focus on creating relationships with people of influence within multicultural communities and was "in talks with major retailers".

International call costs start at five cents per minute to Chinese fixed lines and mobiles. National calls within Australia are charged at 20c per minute plus flagfall.