There may be further volatility ahead for the digital peer-to-peer currency Bitcoin today, as the largest exchange, Mt Gox has again come under a denial of service attack.

The exchange conducted network maintenance overnight Australian time, taking systems offline, and said on its Facebook page it came under attack shortly after.

Mt Gox halted trading yesterday for a 12-hour period, to allow the overheated Bitcoin market to cool down.

"Orders will not be accepted for the moment as we need to upgrade our database to accommodate the trading volume," the exchange said, adding that customers could cancel pending and open orders.

Trading is expected to resume at 11 am Japanese time (12 noon AEST) today.

Yesterday's crash in the value of Bitcoin was not caused by a denial of service attack on Mt Gox, however. Instead, it was the trader not having the capacity to deal with demand.

"Indeed the rather astonishing amount of new accounts opened in the last few days ... plus the number of trades made a huge impact on the overall system that started to lag," Mt Gox said.

"As expected in such situation people started to panic, started to sell Bitcoin in mass (Panic Sale) resulting in an increase of trade that ultimately froze the trade engine." 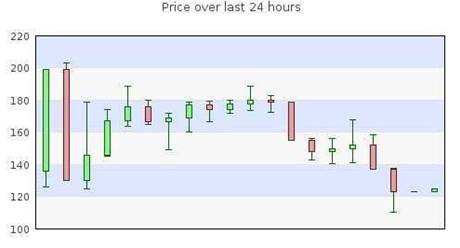 As Mt Gox controls an estimated 80 percent of the Bitcoin exchange market, the effect of the slowdown in trades led the value of the digital currency to drop sharply, as panic set in.

The value of the currency dropped from US$266 to the BTC, to as low as US$105. A brief rally that had Bitcoin testing the US$200 level petered off, and the currency is now trading at approximately US$125.