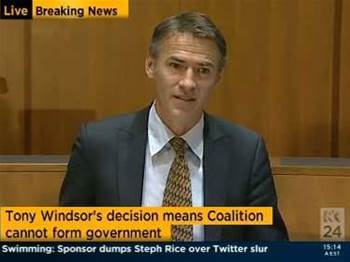 Independent MPs Rob Oakeshott and Tony Windsor have backed Labor to govern Australia, with both saying the national broadband network was critical to their decisions.

The nation stopped for the announcement, which was broadcast live nationally at 3pm AEST.

Windsor said there was an "enormous opportunity for regional Australians to engage with infrastructure of this century".

"To pass up that opportunity and miss the opportunity for a million people of country Australia ... I thought [it] was too good an opportunity to miss," Windsor said.

"My advisers in relation to broadband technology - of which I have many - suggest you do it once, do it right and you do it with fibre.

"That has been one of the major influences I've had in making a decision."

Oakeshott (pictured) also cited "the broadband issue [as] a key sticking point", as well as the computers in schools program.

Windsor said that among the NBN-related agreements reached, there would be "equity in terms of wholesale pricing to country areas" and prioritised rollout to regional Australia.

Windsor "reserved the right" to represent his constituency "on any vote in parliament and [to] move a no-confidence motion" against the Government as he saw fit.

"I intend, with my vote, to support the Labor party," he said.

Oakeshott kept the nation waiting for 15 excruciating minutes before announcing his decision.

He prefaced the announcement with a number of warnings to the incoming government, stating that his decision came down to "stability" and "outcomes" - something he called the "eyes of my children test".

"This is the 20-year decision," Oakeshott said. "[But] this is not a mandate for any government.

"We should have a great big swear jar in the [parliament] building for the next three years and if anyone uses this word ‘mandate' they should have to chip money into it.

"It's not a mandate for anyone, nor is it an endorsement of any brand, philosophy or campaign."

He concluded: "I'm confirming for the Governor-General of Australia that today, I will give confidence and supply in Julia Gillard, unless exceptional circumstances determine otherwise."