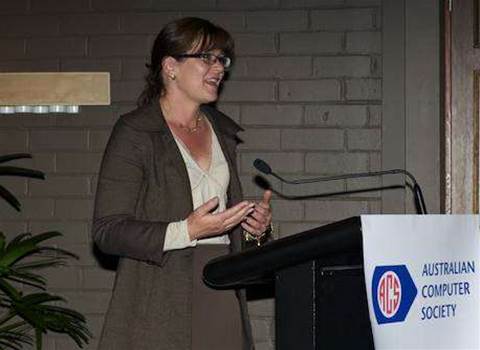 Senator Lundy pays tribute to ACS for her long-term interest in ICT.

Dubbed as the “Senator that gets it”, Kate Lundy earned an honorary membership of the Australian Computer Society (ACS) as part of its ICT awards 2011 in Canberra last night.

“There was no one more fitting than Senator Lundy to be awarded an honorary membership of the society,” said ACS chair Anthony Wong.

Lundy was pleased with the award and said that she believed she was technically not eligible to join the Society as she had no tertiary degree.

“ICT sits at the heart of this country’s prospects and potential,” Lundy said in accepting the award.

“I feel privileged to be part of the telling of that story. I come from the union movement of the building industry. I met an amazing person, Tom Worthington, then incoming ACS president”.

She said Tom Worthington (now Adjunct lecturer at ANU’s Research School of Computer Science) explained the merits of an ISDN line at the time - and how much it cost.

“It gave me an insight into the public policy of ICT that I had no idea of before,” she said.

“When I contemplated politics in 1995, I was convinced that the Internet was going to be one of the biggest debates in the Federal Parliament about this country’s future. For a while there my colleagues said it was a fad and to get over it. Now look at where we are”.

Also receiving recognition that evening were