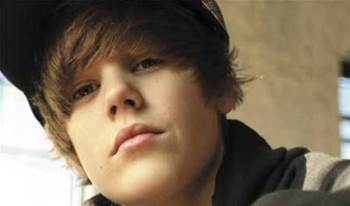 Justin Bieber. Bask in his majesty.

Bieber fervor has once again turned nasty, with fans of the teenaged Canadian pop star adding insults and death-threats to a rival musician's Wikipedia entry. Her crime? Winning a 'Best New Artist' Grammy...

The Wikipedia page for jazz musician Esperanza Spalding has come under a barrage of attacks following the artist’s ‘Best New Artist’ win at the 2011 Grammys.

Spalding managed to beat out teen pop sensation Justin Bieber to win the award, whose latest album, My World 2.0, sold over one million copies.

It was one of the major upsets of this year's Grammy Awards, with most commentators expecting Bieber to win; including Bieber himself. "I worked really hard these past few years and you know, I'm not going to lie — I was disappointed," Bieber told MTV backstage.

Bieber implored his fans not to get too upset, but a Bieber fan scorned is not to be deterred. 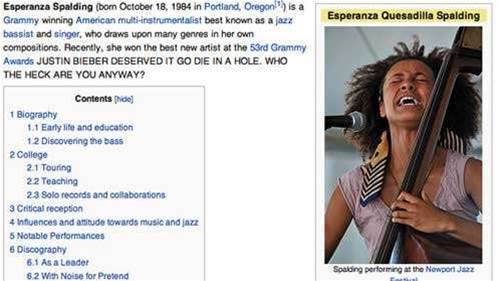 In the hours following the show, an army of outraged Bieber fans took to Spalding’s Wikipedia page, littering her entry with a deluge of disparaging edits.

For example, the first paragraph briefly contained the following insight: "JUSTIN BIEBER DESERVED IT! GO DIE IN A HOLE. WHO THE HECK ARE YOU ANYWAY?”

Elsewhere on the page, Spalding was called a 'reatard' [sic], threatened with death-threats and had her middle name changed to a Mexican dish (Quesadilla).

The moral of the story? Don’t mess with the Bieber.

Got a news tip for our journalists? Share it with us anonymously here.
Copyright © PC & Tech Authority. All rights reserved.
Tags:
biebergrammysjustinsecuritywikipedia