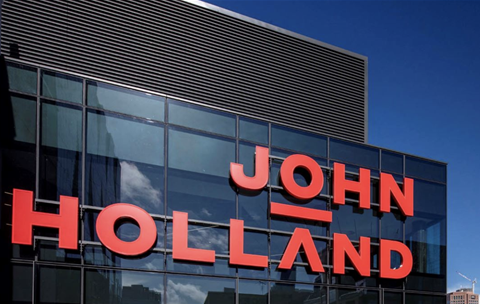 John Holland is embarking on a three-year digital transformation that will see the company re-platform its core systems and put a range of emerging technologies like IoT and digital twins to use.

The engineering contractor - which has had a hand in major projects from Parliament House and the Alice to Darwin Rail Link to the Sydney Football Stadium redevelopment said the transformation would be “comprehensive” and “industry-changing”.

Speaking as part of the CXO Challenge series on The iTnews Podcast, chief digital and information officer Roger Wahl said a “perfect storm of catalysts” made the timing right for transformation on a broad scale.

“Technology companies like Amazon Web Services, Google and Microsoft are also now investing in our industry … [and] they want to partner with us.”

Additionally, Wahl said that governments and universities were keen to strike partnerships with industry and co-invest in the development of technology that had industry-wide potential.

“The investment is there from ‘Big Tech’ and from governments because everybody's going to reap the benefits from a safety and productivity perspective,” Wahl said.

The road to change

Wahl joined John Holland in December 2019 as its chief information officer before adding digital to his title in February of this year.

“I was brought in for two things: to transform the IT function, and to lead the digital transformation for the company,” he said.

“The most remarkable thing I've found is how everybody's ‘in sync’ on the executive leadership team, is supportive of investing in technology and the culture changes and shifts that are going to occur.

“John Holland's executive leadership, led by CEO Joe Barr, are all digitally savvy, and they're all very much supportive of the fact that digital transformation can give us a competitive advantage [as well as] safety, productivity and sustainability [improvements.

“Technology can help us gain traction in the industry, win more deals, and help the lives of our people.”

Part of this is down to preparation.

Running in parallel to the digital transformation - and in fact pre-dating it by around a year-and-a-half - is a project called ‘the John Holland way’.

“It's looking at all our processes across the entire enterprise, for sustainability, repeatability and modernisation,” Wahl said.

The digital transformation itself is organised around three pillars: foundational systems and processes, data and emerging technologies.

There is also a substantial cultural change aspect to the transformation.

“That's the biggest shift from a construction perspective,” Wahl said.

“It's not that we don't want to use technology - we do, and we know that it can make a difference.

“But this is a 70-plus year old company that is just an icon in Australia from an infrastructure perspective. What haven't we built?

“We rebranded a couple years ago to add the ‘people’ to our brand, and this transformation is really about people, sustainability and community. Those are the strategic pillars of the company.

“We've tied our digital transformation strategy to those pillars of the company.

“Transitioning the culture involves a lot of change management, communications, and discussion.”

Work is already underway to modernise John Holland’s core systems including finance, operations and health and safety, and to connect the systems with a series of APIs.

“Some companies just jump to the shiny things like emerging technology, or they have different ERPs [enterprise resource planning systems] across different business units, and things of that nature, which would make it very difficult.

“That's not the case with us. We're going to be on one platform for finance, and for operations, and those platforms will be connected. With a core foundation, you're all singing from the same sheet of music.”

The company’s 30-year-old finance system is the first to be upgraded, with the company re-platforming to an up-and-coming choice in Workday, which is better known for powering human capital management (HCM).

“We knew that there were extremely innovative, but I was quite surprised that they stacked up so well against the traditional platforms from a functional perspective,” Wahl said.

“So we're moving this 30-year-old system, which has served us very, very well, to an out-of-the-box product from Workday, and by doing that we're updating our processes as well to meet the system halfway.”

Finance is first in part owing to the support of chief financial officer Darryn Ray for the move to a more out-of-the-box system and processes.

The finance team is also behind the selection of Workday. “They picked the system, obviously, because they are the users and owners of it,” Wahl said. “IT just guided them to reach that conclusion.”

The attraction of moving to a more standardised, out-of-the-box configuration is something that has driven many companies to redo their core systems and unwind decades of costly customisations.

“We're very insistent on scoping the finance system quite narrowly so it is best-in-class straight out-of-the-box,” Wahl said.

The company is five months into the finance system modernisation and intends to dedicate most of 2021 to the effort.

“It’ll take up to a year to put the finance system in place, [taking into account] all of the workshops that have to happen [and] all the process documentation,” Wahl said.

“We've already agreed on the high-level changes that will happen to the finance community - the roles, responsibilities, processes, and things of that nature.

“We worked with Workday and we have an implementation partner in KPMG helping us do system integration. They have a lot of experience in moving from legacy to modern, automated processes.”

In parallel, John Holland is starting work modernising its operations system, which manages the lifecycle of major engineering and construction projects.

The operations system comprises several products and processes, from bid management and costing to project execution and procurement of materials.

“Later this year, we're going to transform the operations system on top of the finance system and connect the two of them in a lot of different places,” Wahl said.

Given the nature of John Holland’s business, where engagement on mega projects might span the best part of a decade, the move to the new finance and operations systems will be gradual.

“We're going to keep the lights on with the current finance and operations systems for at least five more years,” Wahl said.

“We're going to build a lot of integrations so we have consistent data. The new finance system and operations system will be connected in 20 different places through APIs, and then it'll be connected to the legacy systems, too

“Newer projects and projects that are in their infancy will move to the new finance system as soon as we get it operational towards the end of this year. We're already having those discussions with them.

“The other ones will still be working in their [existing] systems but there'll be APIs connecting [old and new].”

The company’s health and safety core system is also up for modernisation. “We're modernising that at the same time this year and we're plugging that into the other two [core systems],” Wahl said.

The second pillar of the digital transformation is tied to data.

When John Holland’s vision for data is complete, the company will have its already-established data lake connected to its new core platforms, “corroborating [data from] across the enterprise” and surfacing it on “digital dashboards and in real-time reporting”.

“We've built that data lake now, but a lot of it is going to be manual, or from legacy systems and interim systems, until we get to the final operating model,” Wahl said.

“You'll see that data strategy and the outputs from it evolve as steps we take over the next three years move us to very automated and real-time data capture, analytics and display in the end.”

The third and final pillar of John Holland’s digital transformation will see the company trial and productionise a range of emerging technologies.

In a statement, the company said it is “engaging a broad network of partners, including major technology providers, innovators, government agencies and universities to lead the industry through a series of technology pilots across the domains of 5G, edge computing, IoT, artificial intelligence, robotics, augmented/virtual reality, and digital twins.

Wahl said that many emerging technologies could already be put to use in production environments, achieving scale and value.

“It's not aspirational anymore,” he said.

“It can really happen. All these things are possible now.”

For John Holland, one reason that investment in emerging technologies is possible is the financial support on offer for co-development with government and academic researchers.

However, it also expects its own IT efficiency to free up cashflow that it can direct into emerging technology investments.

“We've been able to really drive down IT costs with newer technology and with automated and streamlined processes,” Wahl said.

“As our IT costs have gone down, we've been able to invest some of that in emerging technology proofs-of-concept, which is really exciting.”

In a project where IT costs might have previously cost $1 million, Wahl said half of that might now be spent on core IT and the other half on emerging technologies like digital twins - virtual replicas of a physical environment - that could ultimately help the company add value to the projects it bids for.

Emerging technology could also increase productivity at job sites, for example by allowing the company to tightly track when building materials are set to arrive onsite, which would increase accuracy around construction timeframes and project completion.

"We're going to vault ahead of the competition,” Wahl said.

“We feel our holistic approach to best-in-class connected systems, process excellence, data analytics and emerging technology will change the game altogether for the infrastructure industry.”