Jobs joins chorus against HP's board 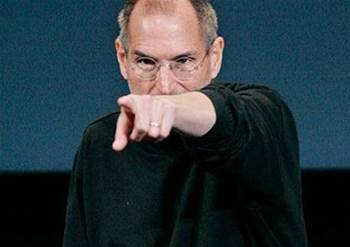 Silicon Valley icon is being 'dismembered'.

Steve Jobs has joined the list of Silicon Valley heavyweights to slam HP's board for destroying the computing giant.

“Hewlett and Packard built a great company, and they thought they had left it in good hands,’’ Jobs ﻿﻿﻿told author Walter Isaacson﻿﻿﻿ for a biography to be released in the US later today.

“But now it’s being dismembered and destroyed... I hope I’ve left a stronger legacy so that will never happen at Apple.’’

Jobs landed his first summer position at HP at age 13 after approaching founder Bill Hewlett for spare parts to build a frequency counter.

Apple has since acquired the land that housed HP's computer systems division, where it plans to build spaceship-like headquarters.

While current HP chief Meg Whitman is believed to be reconsidering spinning off its PC business, numerous observers have criticised HP’s board over its recent calls.

In a widely-quoted email sent to the New York Times, Oracle CEO Larry Ellison described HP's ousting of its then CEO Mark Hurd as “the worst personnel decision since the idiots on the Apple board fired Steve Jobs many years ago.”

Around the time HP gave the boot to Hurd's replacement Leo Apotheker, Tom Perkins, venture capitalist and former HP director, described the company’s current directors as “the worst board in the history of business.”

James Gosling, founder of the Java programming language, backed Jobs’ criticism of HP’s board to the extent that it was not in good hands.

“I absolutely agree with Jobs. It's hard to describe the board's CEO choices as anything but completely insane,” Gosling wrote on his personal blog on Saturday.

“The board should fire themselves and put in place someone who knows how to build and run a systems company.”