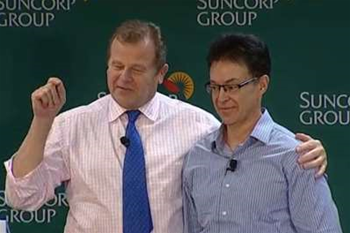 Moves back to the US.

Suncorp’s technology lead Jeff Smith has resigned from the company to take up a role at IBM.

Smith will end his seven-year stint at Suncorp in August this year, moving to the United States to take up a senior executive position at the vendor. His position has not yet been announced, an IBM spokesperson said.

Smith's IT career has included leadership positions at Toyota and Charles Schwab, and CIO roles at both Telstra and Honeywell prior to Suncorp.

Smith was instrumental in driving Suncorp’s agile software development culture, a long systems consolidation and simplification program, and more recently its decision to move 2000 applications to the Amazon Web Services cloud and consolidate data warehouses into a single data store for analysis.

For the past four years Smith served as the chief executive of Suncorp Business Services, a consolidated IT function shared by Suncorp’s numerous insurance and banking businesses.

The company announced that Matt Pancino, currently CIO of the Suncorp Group,  will now assume the position.

A spokesman for Suncorp told iTnews it was as yet unclear how Pancino’s former responsibilities would be met, or whether indeed Suncorp will continue to bestow the ‘Group CIO’ title.

“Jeff’s strong and inspirational leadership qualities have ensured we have exceptional talent within Suncorp Business Services," he said.

"This has allowed a smooth succession plan involving the promotion of Matt Pancino to the CEO role within our shared services function. Matt is a well-qualified executive with a proven track record. I’m delighted with his appointment."

Smith’s proudest legacy at Suncorp was its seven-year journey to drive a new working culture based on lean and agile principles, which has now permeated from IT into the broader business.

“Culture is a term that a lot of people don’t understand, but we take it quite seriously,” Smith told investors late last month. “It’s operational. It informs all the operational practices we want to follow, the innovation practices, the leadership practices".

Suncorp uses agile to “eliminate variation”, he said, “to use visual control systems to solve problems, to harness diversity of thought to get things done quickly.” The methodology values “course correction over perfection, and self-directed teams over command and control".

Suncorp has produced its own curriculum, which it calls ‘Agile Academy’, to reinforce these values for the 55+ graduates Suncorp recruits every year, and for the staff working from its offshore technology delivery partners.

Smith credits Pancino for helping the company to overcome the challenge of ‘distributed agile’, which refers to the communication challenges that come from working in small delivery teams made up of onshore and offshore resources.