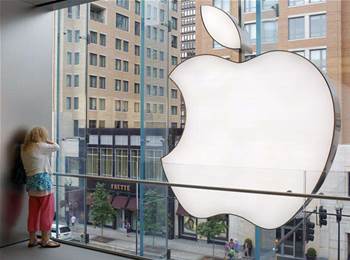 Investors are hoping that Apple will unleash some of its old magic when it takes the wraps off its latest iPhone on Tuesday, with many building bullish share and options positions.

In the past two weeks, Apple investors have bought almost twice the number of call options than puts on three major US option exchanges.

Apple on Tuesday is holding a media event at its headquarters in Cupertino, California, where it is expected to launch an updated iPhone model - widely referred to as the iPhone 5S - as well as a cheaper version of the device dubbed the iPhone 5C.

Investors are hoping that in addition to the phone unveiling, the company will also announce it has finally penetrated the world's largest wireless carrier China Mobile, which has over 740 million users.

Currently, Apple phones are supported by Chinese telecom carriers China Unicom and China Telecom, which has a combined subscriber base of 266 million.

"Apple is effectively only selling to half the Chinese market today," said Brian Colello, analyst with Morningstar. "They can essentially double their sales in China quickly with China Mobile. So it's a big deal."

But Colello also cautioned that many investors could have already bought the stock in the hope of a deal with China Mobile and could sell off if the deal does not materialise in the near term.

"Lack of differentiation, elongating replacement rates, and smartphone growth shifting to the very low-end below the iPhone 5C price point" are the negatives, he said.

Apple shares are down 29 percent since hitting a record high of US$702.10 in September 2012, fueled by fears of slowing growth and thinning margins amid competition from Samsung Electronics and other manufacturers of cheaper Android-based smartphones.

Apple's stock has seen upward momentum recently, sparked by hedge fund billionaire Carl Icahn's revelation last month that he had taken a large position in Apple and was pushing for the company to expand its program of share buybacks.

He has said the stock could rise to as much as US$700 a share if Chief Executive Tim Cook pushed for a larger stock buyback.

Icahn, who is having dinner with Cook this month, said on Monday on CNBC television that Apple shares are "very undervalued" and buying the stock was a "no-brainer."

"If you look at the numbers, look at the multiples that are going on, look at the great cash flow they have ... you really have a lot of protection on the downside," he said.

Wall Street's 12-month target share for Apple ranges from a median estimate of US$530 to as high as US$825, according to Thomson One. The shares closed on Monday up 1.6 percent at US$506.17.

While many options investors are taking an optimistic view, expecting Apple to build on recent gains that have driven the stock up nearly 25 percent since the end of June, some analysts cautioned the market may be overpricing expected volatility in Apple shares.

Ryan Detrick, senior technical analyst at options research firm Schaeffer's Investment Research in Cincinnati, Ohio, said that in the past 10 trading sessions beginning August 23, investors bought 1.98 call options on Apple compared with every put option purchased as a new position, citing data from three major US options exchanges. That call-to-put ratio is higher than 94 percent of the readings over the past year, he said.

"This optimism sets a rather high bar and any disappointment could lead to profit taking or selling," Detrick said.

Options action in Apple on Monday suggests a swing of about 3.4 percent in the shares, based on the weekly options expiring this Friday. That is above the average 1.4 percent absolute one-day move for the previous five iPhone announcements, according to Credit Suisse data.

"If history is any guide, the release of a new iPhone will be a relative non-event for the stock," said Terry Wilson, equity derivatives strategist at Credit Suisse in a report on Monday.

A total of 407,000 options traded on Apple on Monday, about 100,000 contracts fewer than normal, according to options analytics firm Trade Alert.

Out of that, 275,000 were calls, contracts which grant the right to buy a stock at a specific price by a given date and are often used to express bullish sentiment. A put conveys the right to sell the shares at a preset price.

About 46 percent of the total volume was in the weekly options expiring this Friday, led by the US$500, US$510 and US$520 strike calls, Trade Alert data shows.

"The September US$500 call strike has the most open interest of any near-dated option strike, though that's not a major surprise given that the 500 strike has been the most actively traded for the past few weeks," said Enis Taner, global macro editor of options research firm RiskReversal.com.