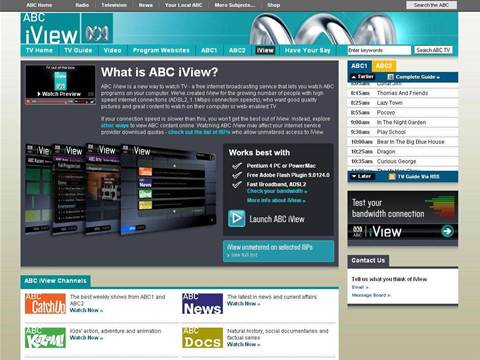 Internode has struck a deal with the ABC to offer unmetered, quota-free streaming of its iView IPTV service to its customers.

The collaboration between Internode and ABC ‘has seen the resolution of previous technical challenges’ that prevented Internode from providing the service.

These ‘challenges’ appear to have been on the ABC side more than Internode, according to Internode’s managing director, Simon Hackett.

“Internode is pleased to provide this service to its customers, with no impact on their download quotas, now that the ABC has made it technically possible for us to do so,” said Hackett.

The ABC’s director of innovation, Ian Carroll, welcomed the move.

“The ABC experience of iView has been that ISP customers can't wait to use a TV service like iView if they do not have to worry about metered usage,” he said.

“We also see this in the UK where the BBC's iPlayer has had a major impact on television viewing habits. Most UK ISP's and telcos offer iPlayer viewing unmetered.

“The ABC welcomes those ISPs who want to lead the way for their customers,” said Carroll.
Got a news tip for our journalists? Share it with us anonymously here.