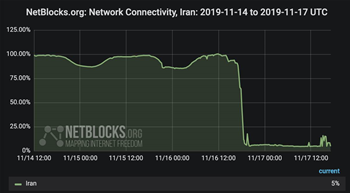 Authorities in the Islamic Republic of Iran have ordered providers in the country to shutdown internet access, after widespread protests over petrol price increases rock the nation.

Oracle's Internet Intelligence arm noted observed that three-quarters of packet traces to Iran are failing for the third day running, and that many border gateway protocol (BGP) routes have been withdrawn.

Internet blackout in Iran continues. 3rd of BGP routes are withdrawn and 75% of our traceroute measurements to IR are now failing.https://t.co/dXGkjJitpI

This amounts to an outright disconnection of Iran from the global internet, Oracle said.

Digital rights organisation Netblocks said the shutdown was almost total with national connectivity at just five per cent of usual levels, and mobile operators MCI, Rightel and IranCell being offline.

Reuters reported that riot police has been clashing with protesters nationwide, after the Iranian government announced petrol price hikes.

One policeman has died and thousands of protesters have been arrested with hundreds of banks torched in the riots.

The White House has condemned the use of lethal force by Iran, and the communications shutdown, saying protesters should be allowed to speak.

Cutting off internet access has become increasingly common in recent years to prevent protesters from using social media and other communications channels to record police brutality and to organise themselves.