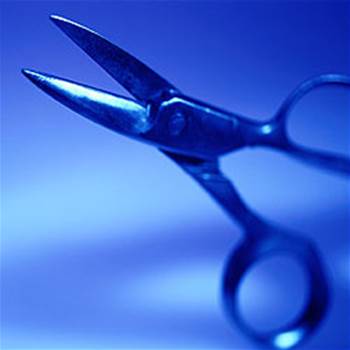 THOUSANDS of punters in Sydney lost their Internet, phones and cable telly after someone managed to carry out one of the most basic hacks in Christendom.

According to Telstra, vandals cut two fibre optic cables at the crack of dawn on Saturday.

Apparently a team of 30 dedicated techies worked through the night to fix some of the problems. Quite how many people can crowd around two broken cables before the law of diminishing returns applies was unclear.

Telstra spokesman Warwick Ponder told the Sydney Morning Herald yesterday more than 5000 were still without service even though the team of 30 managed to splice together some of the optical fibres with sticky back plastic and PVA glue.

So much was riding on the cables that businesses were without Eftpos and several mobile base stations were also out of order.

Telstra hoped to have the whole lot back on by this morning.

Ponder said he was mightily miffed with the vandals who seemed to have put a fair few people out of action over the weekend.

Still it is nice to know that you do not really need to have hacking skills. If you really want to mess people up down under all you need is a pair of wire cutters and all of Sydney is your raw prawn. µ

L’Inq The Sydney Morning Herald
Got a news tip for our journalists? Share it with us anonymously here.
theinquirer.net (c) 2010 Incisive Media
Tags:
brokenininternetsecuritysydney