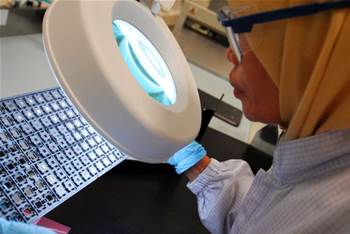 Intel Corp on Monday unveiled the most extensive overhaul of its Atom mobile processors, with improved performance that the PC chipmaker expects will help it challenge Qualcomm in smartphones and tablets.

"We have not only reduced the power in a significant manner but it comes with significant performance," Perlmutter said.

Intel's chips dominate the PC industry but the company has struggled to adapt its processors for smartphones and tablets, a market dominated by Qualcomm.

The Silvermont microarchitecture is analogous to redesigning an automobile engine that will be used a range of car models with different features, Perlmutter said.

He said it offers up to three times more computing performance than current chips and as much as five times lower power consumption.

Intel introduced its Atom mobile processors for netbooks in 2008 and they have so far failed to be widely adopted in smartphones and tablets despite improvements made to them.

Silvermont will be the basis for Intel's 22-nanometer Bay Trail tablet chips due out later this year and Intel says it will more than double the performance of its current tablet chips.

It will also be used in Intel's upcoming Merrifield smartphone chips and Avoton chips for microservers.

While Silvermont improves the performance of Intel's processors, the Santa Clara, California company faces other major challenges in mobile.

It has fallen behind in launching chips with Long Term Evolution, or LTE, a high-speed wireless technology already offered by Qualcomm and increasingly found in smartphones launched in the United States, including Apple's iPhone and Samsung's Galaxy line.