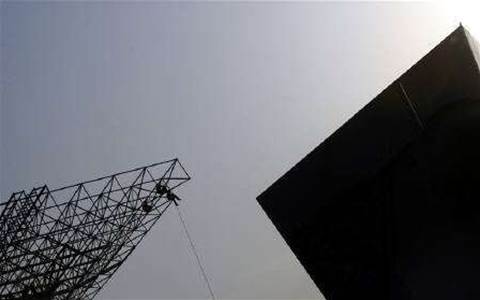 When Infosys Technologies, India's second-largest IT firm, hired paramilitary troops to protect its sprawling headquarters in Bangalore, some observers might have thought they had gone overboard.

But since the Mumbai attacks last year, India's software exporters have bolstered security due to concerns that militants might target their headquarters as symbols of the country's economic success and to deter foreign investors.

Foremost among those seeking to hire well-armed paramilitary troops are companies in India's Silicon Valley, Bangalore, the nerve centre of the nation's US$60 billion outsourcing industry that runs services from software coding to managing computer networks and call centers.

"India's IT firms are the flag-bearers of the country's thriving knowledge economy. This makes them 'high economic-value' targets with a global identity," said Manoj Vohra, director of research at the Economist Intelligence Unit's India division.

"Any assault on them will not only hurt India's commercial interests, but will also make the message travel faster globally."

Nasdaq-listed Infosys Technologies last month became the first private-sector firm to get the elite Central Industrial Security Force (CISF), a government trained paramilitary force, to guard its swanky Bangalore premises, which has about 20,000 staff. More than 80 firms, including IT firm Wipro, are also potential candidates for CISF protection.

The Mumbai attacks prompted the government to expand the services of the CISF, trained to protect such critical infrastructure as airports and power plants, to private sector firms in order to calm nervous investors.

The move signalled a shift in the role of government agencies in securing the private sector which has been a major engine of growth for India. The services sector, to which IT is a major contributor, makes up 57 percent of India's GDP.

"Clearly, even a minor incident at these firms can have an impact on their business and, therefore, the Indian economy," said Apurva Shah, head of research at brokerage Prabhudas Lilladher.

"If clients are nervous about visiting the Infosys campus because of security concerns, that is sure to have wider implications for the entire country," he said.

India is no stranger to security threats, including from Maoists, who have targeted factories and mines and have kidnapped businessmen in the past, as well as Islamists, such as the Pakistani-trained gunmen behind the Mumbai attacks.

The Mumbai police, armed with World War Two era rifles, were caught flat-footed by the gunmen who came armed with automatic weapons and high-tech communications equipment and targeted hotels popular with foreigners in India's financial capital.

So it's probably no surprise that firms have little confidence in entrusting their security to the local police, who are seen as ill-equipped, poorly trained and corrupt.

The CISF has 112,000 personnel manning nearly 300 public spaces, and will recruit about 10,000 every year, CISF spokesman Rohit Katiyar said.

The CISF will first consider applications from critical sectors such as software and oil and gas, including Reliance Industries' Jamnagar refinery complex, the world's largest.

Paramilitary troops in combat fatigues will reassure foreign investors, although some experts say that it will extend the CISF's manpower resources and that the government should instead better train police and allow more private security firms.

"Our troops would get used up at a time when we're also building more airports and stepping up action against Maoists," said Raghu Raman, head of risk consultancy Mahindra Special Services Group.

Corporate jitters will more than double the market for electronic security systems from about US$400 million a year, analysts estimate, and keep busy the more than 5,000 private security firms staffed by poorly trained guards who are usually not allowed to carry arms.

"At least for the medium-term, security will involve a combination of local police, private security and paramilitary forces. We would be satisfied with that arrangement," said Rattan Keswani, president of Trident Hotels, one of the hotels targeted in the Mumbai attacks.

"Is the threat going to go away? No, and that is a reality the entire world has to come to terms with."

The protection does not come cheap: Infosys pays just over US$2,000 a day for 101 CISF personnel. That's more than double what it pays a private security firm.

But it's money well-spent, said Shah from brokerage Prabhudas Lilladher, as it will be viewed favourably by shareholders and investors, and is not significant enough to dent India's competitive edge over China and other emerging markets.

India this year raised its defence budget to about US$30 billion to modernise its weapons, overhaul its security forces and boost border security. But that figure is still less than half of China's defence spending.

Despite extensive media coverage of the three-day rampage, the Mumbai attacks failed to put a dampener on foreign investment, which is likely to rise by an annual 6 percent to reach about US$40 billion in the year until March 2010, according to government estimates.

"Security is a bigger concern now, but it's not yet at a point where it's a big deterrent to investors in India," said Ajai Sahni, executive director at the Institute for Conflict Management in New Delhi.