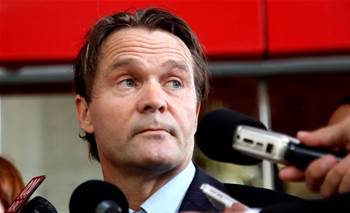 The Australian Federation Against Copyright Theft has used its latest court loss and the impending NBN rollout as a springboard to lobby for legislative reforms on copyright.

He said the High Court decision exposed "the failure of copyright law to keep pace with the online environment" and urged the Government to provide legislative certainty around the copyright issue.

"We are confident the Government would not want copyright infringement to go on unabated across Australian networks especially with the rollout of the NBN," he said.

"The film and TV industry has always seen the internet as a medium of enormous potential to our business. Currently there are more than 20 online business models that makes rights holders content available to the Australian public and this isn't lost on the Australian public."

Gane declined to make comments on the details of the 5-0 decision against AFACT, saying it was "too early" and repeatedly referring to details in a prepared statement.

He said that today's decision would be "extremely concerning" for all content creators.

The foundation refused to comment or validate the cited survey results and referred iTnews to AFACT's website.

"Unfortunately commerce can only take place in a free market economy, not a free-for-all economy," Gane said.

"There's no business model in the world that can compete with free."

The IPAF publicly notes support for AFACT on its website and includes the federation's US sponsor, the Motion Picture Association of America, on its board of members among other rights holders.

Despite calls for legislative changes, Gane said rights holders would continue discussions with ISPs and the Federal Government in hopes of constructing a bipartisan industry code that focused on sending educational notices to infringing users through ISPs.

The code would echo similar moves toward an industry protocol signed between rights holders and ISPs in the US.

Gane said AFACT supported the French model, which included government intervention in sending notices to users, but had been told during discussions here that the model was not appropriate for Australia.

Drafting of the Australian code of conduct has continued since November last year, which Gane said was a "180-degree shift" in the ISP industry's approach to the issue.

John Stanton, chief executive of industry body Communications Alliance which has led the talks, said he hoped today's judgment would "help us accelerate the process of agreeing with rights holders" on a industry scheme.

Gane would not confirm any potential changes to the litigious approach to ISPs or potentially end-users following the High Court decision.

"We have always maintained that we prefer a more proportionate and effective approach which is for ISPs to notify their customers when copyright infringements are occurring across their accounts," he said.

The organisation has previously moved to distance itself from smaller rights holders which had sought to sue individual internet users for copyright infringement in Australia.

Follow all the latest iiTrial news on the case between iiNet and AFACT here.