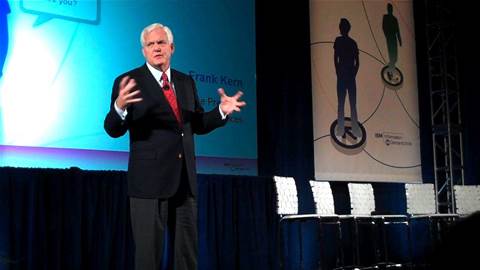 IBM plans to open two new Business Intelligence competency centres in Washington, DC and London, UK by the end of November - the US facility to be used to fight cybercrime and the London centre to provide analysis around the finance industry.

Kern said the Washington DC facility would be a "cyber security centre" while the London facility will "focus on the finance area". More details will be available in 30 days, he said.

Kern said the company planned to hire or train 4000 people - be they analyst, software developers or other researchers - to work in these centres.

"We are very committed to the area of business analytics," he said. "We're at the beginning of what's possible."

Kern cited numerous examples of how business analytics can be used to solve real world problems.

He said that both man-made and natural systems are "creating an extraordinary amount of information" that needs to be better understood.

IBM, he said, was working on a project that studies the data collated from sensors in New York's Hudson River river to track pollution levels. Fish are also tagged in the Hudson, he said, in order to understand how environmental changes are impacting fish stocks.

Further, Kern said IBM is also working on a project in which cattle are tagged to understand the creature's lifecycle "from birth to death to the hamburger."

Business Intelligence, and more specifically the 'predictive analysis' capabilities IBM boasts through its acquisitions of SPSS and ILOG, enables customers to move from "sensing and responding" to such data to a model in which they "predict and act."

The department's 'Real Time Crime Response Centre' has created "a master data warehouse of information that allows them to solve crime in New York City faster," he said.

"There was a recent example in which the police found a nickname for a suspect," he said. "They could go into database, find out who did it, and within two hours an arrest was made. They can do the same based on what tattoo the criminal has - whether it was a spider, for example."

Further, the NYPD now allows citizens to "send in photos or videos via 911 or 311, so that if you as a citizen see a crime being committed, you can send it in to Real Time Crime Center - and they will immediately act upon it.

"Think about the power citizens now have in New York City to tackle crime," he said.