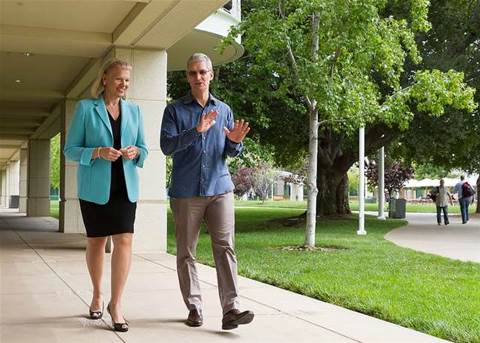 IBM is to become an enterprise reseller and ISV for iPads and iPhones, under an unexpected deal announced today by Apple CEO Tim Cook and IBM CEO Ginni Rometty.

Under the terms of the deal, IBM’s MobileFirst division will provide enterprise sales and on-site support for iOS devices and applications in time for the release of iOS 8. Big Blue will handle everything from supply of devices to activation and management services for enterprise customers.

Apple in turn will develop a new enterprise-grade support option under its AppleCare support program. AppleCare for Enterprise will provide corporate IT departments with seven days a week support, with the on-site components of the service provided by IBM staff.

The two companies will also commit to developing over a hundred enterprise apps specific to the retail, healthcare, banking, travel and transportation, telecommunications and insurance sectors, with tie-ins to IBM's hosted big data and analytics capabilities. IBM pledged to throw more than 100,000 industry consultants and software developers behind this effort.

The deal does not mean that IBM will cease to resell other mobile devices such as those running Google's Android.

What it means for the Apple ecosystem

In a statement, Apple chief executive Tim Cook called the move a "radical step for enterprise", and pointed to the vast majority of Fortune 500 and global companies already running iOS-based devices.

The company has so far not shown a desire to shift into the enterprise market, relying on consumer demand to drive sales. Attempts to build its own enterprise salesforce in Australia were never backed by enterprise-class management tools or support options.

Today’s announcement will be of great concern to telcos and managed service providers that built support packages for enterprise adoption of iOS in the absence of Apple offering its own.

What it means for IBM

The deal cements IBM's position as a trusted provider of software and service to the enterprise.

The company sold off its PC division to Chinese company Lenovo in 2004, and more recently handed the same company its low-end server business. Big Blue has also sold off several storage patents to Pure Storage.

The company has also into both infrastructure and software cloud services via its acquisition of SoftLayer and launch of BlueMix cloud services.

The only anomaly in this strategy is IBM's continued commitment to the mainframe and mid-range Power platforms, both of which remain critical to many of its largest customers.