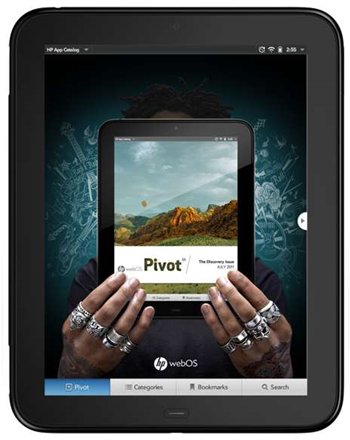 And a TouchPad apps mag, Pivot.

HP will offer developers loyalty discounts for sticking with webOS 3.0 apps for its TouchPad Apps Catalogue, it said Thursday.

It provided little detail about how much developers would gain, but said the discount structure would be based on how many years a developer was in the Palm developer program and had worked with apps in Palm's App Catalogue.

HP planned to reveal more at the July 1 US launch of the TouchPad device.

HP also announced the launch of a monthly app magazine, Pivot, showcasing presumably what HP's staff think are the best webOS 3.0 applications that run on the TouchPad.

The magazine would also include columns on “digital culture” from guest writers, application focussed features and in-depth reviews, “ all accompanied by vibrant photos and illustrations on HP TouchPad’s brilliant screen,” HP pointed out.

It did not clarify where it would source its material, but Joe Simon, chief technology officer at Conde Naste, publisher of Wired and The New Yorker amongst others, gave it the thumbs up.

“It provides an enriching experience for customers and is a great environment for developers considering the platform,” he said.

No new details were offered for the proposed release date for the TouchPad in Australia and New Zealand, which should occur later this year.