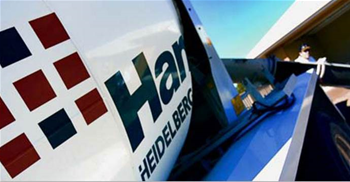 Calculates bill of materials in under one second.

Hanson Australia has found a way to convert over 50,000 recipes for concrete into code that can calculate the bill of materials for a truck delivery in under one second.

The concrete giant completed the three-year project at the end of last year by creating an algorithm that CIO Rob Downing called a “game changer for our industry globally”.

Dubbed ‘dynamic mix control’, the project coded Hanson’s “secret herbs and spices”: all the different ways the constituent raw materials in concrete could be mixed, and how much each mix cost.

“The challenge was to take this complex materials science problem (involving third-order polynomial calculations), with so many contributing characteristics, and recalculate the bill of materials real-time,” Downing said.

“The impact of a miscalculation in the bill of materials in a concrete recipe can be catastrophic.

“It can cause a large structure (bridge, high rise building, etc) to fail, it can cause significant loss of revenue and loss of reputation.”

Materials may be added or removed to mixes to improve performance, or to account for seasonal variations in temperature or different processes used at the company’s 220-plus concrete plants.

Mixes and costings had previously been managed out of an SAP system that required “continual maintenance”.

The company faced two looming challenges: dealing with an ageing workforce that affected its ability to recruit lab staff, and “increasing dimensions of concrete property attributes (for example adding colours to concrete)”.

“[Combined, they] meant that we would have much higher numbers of bills of materials in the future, with less people skilled to maintain them,” Downing said.

With so much at stake, the company took a “slow and steady” approach to the project.

“We knew that the project had to go through very rigorous prototyping, testing and careful rollout planning,” Downing said.

Hanson progressively introduced the algorithm at its plants, giving each a “three-to-five day” cutover period where they could run old and new ways of calculating mixes in parallel.

The company’s 220-plus concrete plants were progressively enabled over a two-year period.

The recipes are still managed out of SAP but now take advantage of the new algorithm.

A new small centralised team of technical personnel was established to oversee the bills of material, and to ensure that lab test results for mix variations were appropriately incorporated.

Downing said savings were “already evident” with the system now fully live and operational. He expects the company to see payback “in the order of one year on costs invested".

This project has been named a finalist in the industrial category of the iTnews Benchmark Awards 2017. View the full list of finalists here.