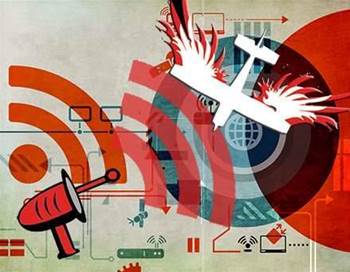 Flying drones can be crashed using cheap tools available on eBay, a researcher has revealed.

The navigation systems used by autonomous drones can be interfered with using tools including GPS jammers and do-it-yourself high energy radio frequency guns.

Drones could also be set to earth by flying machines close by that have powerful radio systems.

New Zealand security researcher Stuart MacIntosh told delegates at the Kiwicon 7 conference in Wellington that some vulnerable drone technology designed in the hobby space had trickled down into use by police and commercial operators.

It meant a variety of drones were open to attacks that could destabilise or crash the aircraft.

"You can walk all over [the Parrot AR Drone] with frequency-hopping spread spectrum ... you can fly a radio plane near an AR drone and it will very quickly get packet loss," MacIntosh said.

"A lot of these UAVs (unmanned aerial vehicles) were not really designed with security in mind apart from some that may be destined for law enforcement use or military use.

Listen to the talk: UAV systems and security

"You can build your own [GPS] jammer or buy one off eBay for $100 with free shipping."

Other systems including the MAVLINK protocol could be interfered with due to security flaws.

MacIntosh said the research was conducted to demonstrate the flaws in drone technology and urged people not to use the information to attack the machines.

GPS jamming in Australia was illegal. Authorities intercepted more than 100 jammers sent by post between November 2011 and June last year.