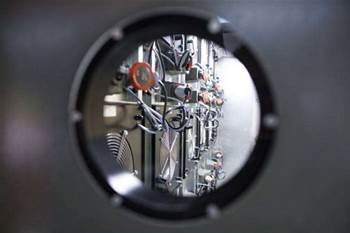 The NSW government and Metronode have finished building the data centres many thought would never be built.

Yesterday, secretary of the Department of Finance, Services and Innovation (DFSI) Martin Hoffman presided over the opening of stage two of the Unanderra GovDC facility, built by Metronode to house tenants from the state's public sector.

Hoffman acknowledged the blood, sweat and tears that had gone into the project to get to the final stage of the originally planned capacity.

Those that have been there from the beginning reflected on how close the project came to never being completed.

The plan - to establish two central NSW government data centres to meet burgeoning agency demand and consolidate the 130 computing facilities that had sprouted throughout the state - was hatched in 2008. It would be close to four years before a contract was inked, and then months after that before the first brick would be laid.

Speaking in Unanderra yesterday, chair of the GovDC control group Brian McGlynn reflected on the many obstacles that got in the way.

"The nature of tenders is that you ask for everything and hope you get half of it," he said.

"Of the five parties that tendered [to build the data centre], two of them said we would never get what we wanted. They offered us their standard data centre and their standard terms and conditions and said 'come back to us when you have failed'."

The project, he said "has seen a change in government, several changes in minister, two changes in department structure, four changes in director-general."

"On the private side we had a major change in the ownership of Metronode. It had a change in organisational structure and senior management. And yet with all of this, the project is delivering on its original objectives," he said.

DFSI's GovDC lead, Pedro Harris, recalled leading the review team commissioned by the incoming Liberal government in early 2011 to advise on whether the policy would be one of the many Labor schemes to be given the chop.

He said the commitment of anchor tenants like NSW Health and the Department of Education was what, ultimately, got it over the line.

Fast forward serveral years, and Education CIO Stephen Loquet was able to finally switch the lights off in the agency's 24 year-old St Leonards data centre in August this year.

"It had grown from a basic facility to one that housed over 1100 servers, 3000 virtual machines and 300+ applications. We will work on finalising the decommissioning of our secondary data centre at Ultimo in the coming 12 months," he told attendees at the opening.

Many point to the modular approach to construction as the secret to GovDC's largely hiccup-free construction and operation to date.

Metronode uses pre-fabricated modules to piece the facilities together.

It already owns, and has development approval on, enough vacant land adjacent to the Unanderra facility to begin work on the next stages as soon as the NSW government says go.

The agreement between the pair states that Metronode with have new stages up and running within nine months of getting the green light.

This means the state isn't forced into trying to forecast demand years ahead, avoiding missteps that lead to wasted capacity (like in Queensland's Polaris facility run by CITEC) or capacity that is used up as soon as construction is done (as was reportedly the case with Victoria's data centre consolidation effort).

With 90 percent of the new data hall already let, the next opening ceremony mightn't be far off.

Although construction of Metronode's original commitment is now done, Harris pointed out that there was still two years to go on the state's agency migration schedule.

"We are at the halfway point. I think our best work starts now," he said.

DFSI now plans to expand its cloud connect scheme, which allows agency to intefrface into AWS and Rackspace public clouds through GovDC's own secure gateway, by linking up with cloud services marketplaces run by other data centre operators like Global Switch or Digital Realty, so customers from each can share services.