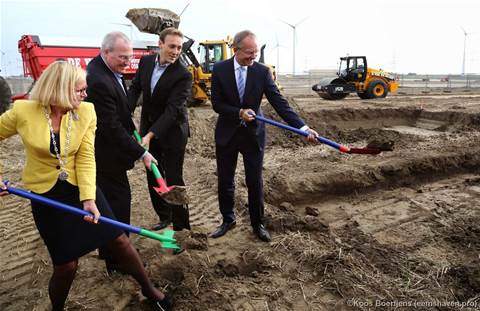 Google has announced it will spend €600 million (A$870 million) on a massive new data centre in northern Netherlands, which will be free-cooled and run on renewable energy.

The new 120 megawatt Eemshaven facility will cover 44 hectares and will complement the existing 20 megawatt centre Google rents from data centre operator TCN in the same area. It is forecast to be fully operational in late 2017.

Eemshaven, a seaport in the Dutch city of Groningen, promotes itself as an ideal location for data centres due to its cold climate, proximity to several types of renewable energy, and its position as a hub for international internet cables.

The new Eemshaven facility will be Google's fourth large centre in Europe.

"The new Dutch data centre will benefit from the latest designs in cooling and electrical technology. It will be free-cooled - taking advantage of natural assets like cool air and grey water to keep our servers cool," William Echikson, Google's European head of data centre community relations wrote in a blog post.

"Our data centres use 50 percent less energy than a typical data centre - and our intention is to run this new facility on renewable energy."

Echikson said Google had specifically been searching for locations with certain resources to support large data centres, including those that offer a choice of power and other utilities.

Facebook last year switched on its Luleå, Sweden data centre in what it claimed was one of the most efficient and sustainable facilities in the world.

The centre similarly utilises a cooler climate as well as renewable energy produced by hydro power. Facebook claimed its approach had enabled it to cut down its number of backup generators by 70 percent.

Apple has also reportedly eyed off a 40 hectare plot in Eemshaven in its pursuit for 100 percent renewable energy in its data centres, and Microsoft was last year reported to have bought a large site in the Northern Holland town of Middenmeer for a 17.5 megawatt facility.