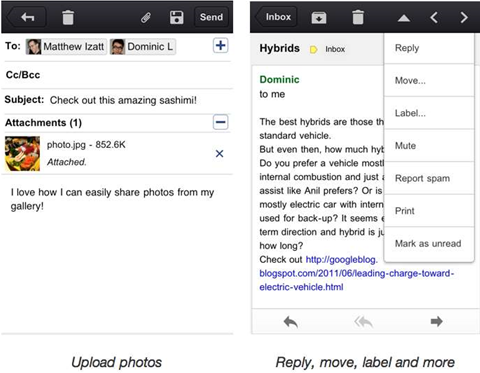 Google has pulled its iOS Gmail app just hours after it launched, citing a bug which crippled its functionality.

"Unfortunately, it contained a bug which broke notifications and caused users to see an error message when first opening the app," Google's Gmail team explained.

"Sorry we messed up," the Gmail team added on Twitter.

The app for the iPhone, iPad and iPod touch was meant to be "one more reason to switch to Gmail", according to its post earlier in the day.

Gmail for iOS will be brought back "soon", but Google has not given a timeframe.

When Google does re-release it, Gmail iOS should deliver push notifications with alert sounds, autocomplete features from Gmail contacts or the device's address book, and a photo uploader.

Google's explanation that it removed the app due to a notifications bug was not the only problem, according to those who had time to test it out.

Gmail for iOS lacked the ability to add multiple accounts, while other users complained it looked just like the Gmail web interface, according to Mac World.

One response to an apology by Google's cloud applications lead, Dave Girouard, for pushing a "bad version" of its iOS app, was that the "app seems to be a wraparound skin for the web app."

"So it doesn't zip along like a native app does, doesn't update on the fly (pull down to refresh to see emails feels like something from 1999) and so on," said game design and production consultant, Tadhg Kelly.

The flawed iOS launch is the second time this week Google has faced ridicule for its apps.

Response to a new Gmail interface has been lukewarm while users expressed extreme disappointment at the new Google Reader.