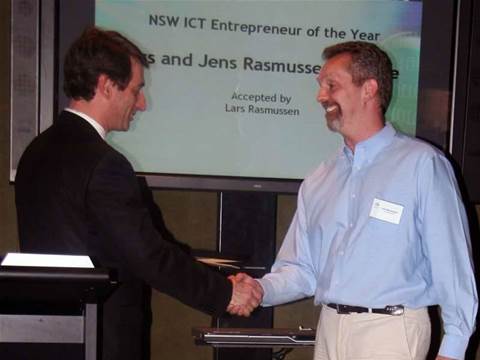 For contributing to Aussie tech industry.

The brothers beat seven other state finalists to be awarded at a National ICT Australia (NICTA) event at the NSW Parliament House yesterday.

Lars received the award from NSW Treasurer Eric Roozendaal, who highlighted the global use of Google Maps and its role in the establishment of the Sydney Googleplex.

The pair were also judged on the technicality of their work and their potential to act as role models for future generations of Australian innovators.

Google Maps was born in 2003 from the Rasmussen brothers’ Sydney start-up Where 2 Technologies, which was acquired by the search giant in October 2004.

The technology was used by one third of all Google visitors, and accounted for three percent of global Google traffic, in what Lars said was “beyond my wildest expectations”.

Danish-born Lars said Where 2 Technologies provided a backbone for Google’s Australian headquarters, and credited his wife for their decision to reside in Sydney.

“I’d like to take a lot of credit for [the establishment of the Googleplex] but they probably would have done it anyway,” he said, speculating that the Googleplex may not have been established as soon, or have been as large, without the Maps team.

Lars and Jens Rasmussen were also credited for creating Google Wave, which was launched last year and discontinued as a stand-alone product in August.

Other finalists for the 2010 NSW Award were: