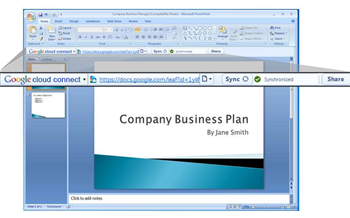 An education in Docs.

Google has invited its Google Apps for Business customers to test a new feature for Microsoft Office which instantly replicates an Office document in Google’s cloud.

The new tool will work with Office 2003, 2007 and 2010 and brings Google Docs cloud features to Office documents.

Cloud Connect group product manager Shan Sinha said the tool gives Office users a more granular history of changes to documents, as well as a cloud backup that can be accessed by multiple users over the web.

“Because the files are stored in the cloud, people always have access to the current version,” he said.

“These are all features that Google Docs users already enjoy today, and now we’re bringing them to Microsoft Office.”

The tool may chip away at resistance to Google Docs in those environments where Office is still available to users.

Many Google Apps customers continue to rely on Office for document creation for its richer feature set and an interface users are familiar with.

Australian home lender Mortgage Choice, for example, made the shift to Google Apps last year for its lenders. While it ditched IBM’s Lotus Notes, it retained Office as the “corporate standard”.