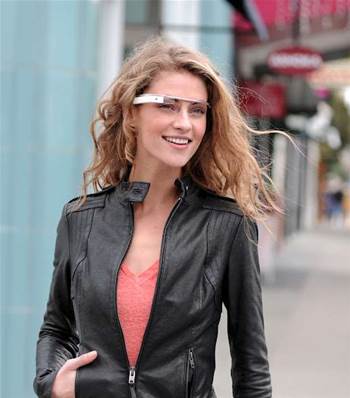 Google has released a conceptual video of a project called 'Glass' that puts an Apple-like Siri querying engine and a whole lot more into a single-eye lense.

Scant details were released by the Google[x] team after several leaked reports since December 2011 about "wearable" devices, initially thought to be placed on a user's sleeve.

The New York Times' Bits blog reported on Apple and Google's "wearable" computing projects last December and has since reported the devices would come in the form of glasses that should be available by the end of 2012 for between US$250 and US$600.

Others such as Mac specialist publisher 9to5 have compared the monocle to the glasses worn by Arnold Schwarzenegger in the first Terminator movie.

The prototype device images Google revealed Wednesday look sleek yet awkward, but if it works as Google explains, they may prove a popular enhancement to the smartphones that millions of people are activating every day.

Google’s YouTube video takes you through the day of a person waking up, eating breakfast, setting up a casual meeting at a bookstore, tracking the walk to the store, in wihcih Google Maps is invoked to assist with a Siri-like -- or in Google's case, supposedly called Majel --  voice command tool for doing things like adding reminders to the user’s smartphone calendar.

"We’re sharing this information now because we want to start a conversation and learn from your valuable input. So we took a few design photos to show what this technology could look like and created a video to demonstrate what it might enable you to do," wrote Google's X team on Google+.