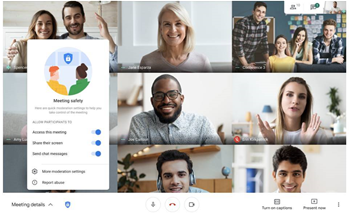 Users of Google's office productivity and collaboration G Suite tools will get a new set of security features to prevent phishing and meeting bombing, and to make device management easier.

Gmail will trial Brand Indicators for Message Identification (BIMI), a feature that ties up with Domain-based Message Authentication, Reporting, and Conformance (DMARC), a system used to prevent spammers from forging addresses.

BIMI lets organisations that use DMARC to authenticate their emails validate their logos and send them to Google.

Google will apply further anti-abuse checks to the authenticated emails and if they pass, Gmail will then display organisations' logos in the avatar slots in the user interface, to show that the messages can be trusted.

Competing providers such as Fastmail, Sendgrid, and Valimail are also part of the BIMI initative, along with Microsoft's LinkedIn professional social network.

Video conferencing also gets a security boost with Meet hosts getting better control over who can "knock" and ask to join meetings.

Attendees who are ejected can't rejoin the same meeting without hosts inviting them again, and multiple rejected knocks gets users automatically banned.

Meet also gets fine-grained "safety locks" to control how users must join meetings, to block anonymous participants, and to manage the level of interaction allowed between those in calls.

Chat rooms with suspected malicious activity can be blocked and reported by users, and spammy invitation detection and blocking will be introduced.

G Suite admins get a slew of new features to better manage security, including a simpler way to control app access.

Automated information rights management controls that can be set to prevent users from downloading, printing or copying Drive documents with sensitive content, will also be available to G Suite admins.

The IRM controls tie in with Data Loss Prevention (DLP) rules, similar to what Microsoft 365 is trialling, and are available in beta preview for G Suite Enterprise, Enterprise Essentials and Enterprise for Education Google customers.

Device management in G Suite will also be overhauled with a cleaner page in the admin console, and integration with Apple Business Manager to distribute and manage iOS devices, for some editions of Google's productivity suite.