Gmail in line for Google+ facelift 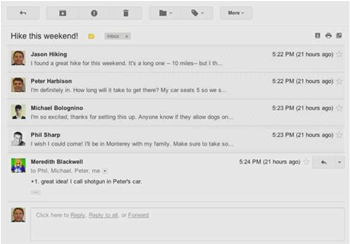 Google has been rumoured to be working on a facelift for Gmail, replacing text buttons with icons consistent with the style of its social networking site Google+.

Google watchers at the Google Operating System blog released images of what they claimed to be the new interface, allegedly taken from a private video hosted on Google’s You Tube channel.

The proposed changes would bring some Gmail features in line with Microsoft’s Outlook client by employing icons instead of Gmail’s text based buttons like “Archive”, “Spam” and “Delete”.

Other potential new features include an Apple-like profile picture next to each contact, a layout that adjusts to the window size and advanced search options.

The refresh may also include features borrowed from Facebook’s blended email and instant messaging system, with a text box located next to the user’s profile image, offering the options, Reply, Reply to All or Forward.

Google this week refreshed its Gmail client for Android devices in conjunction with the launch of its Ice Cream Sandwich Android system, and also recently added an Offline mode for its Chrome browser.

A more concrete change from Mountain View is expected in the coming weeks with the promise of its RSS subscription service Google Reader more tightly integrated with Google +.

The first step will be killing off 'social' features included in Google Reader, "like friending, following and shared link blogs inside of Reader," Google explained in a blog post Thursday.

"We think the end result is better than what's available today, and you can sign up for Google+ right now to start prepping Reader-specific circles," said Google software engineer Alan Green.

"The new Google Reader will be a great place to read and share your feeds. And in addition to Google+, you'll still be able to share to almost any service using Send To."