Gillard to be Prime Minister 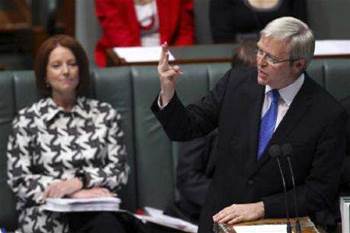 The Communications portfolio has been thrown wide open under the new leadership of Julia Gillard, who usurped Prime Minister Kevin Rudd today in an uncontested party room spill.

Gillard was announced as the new leader of the party just after 9:30am today, with Wayne Swan also uncontested as Deputy Prime Minister, after Prime Minister Rudd decided he did not have the numbers to contest.

Gillard is yet to announce whether she will reshuffle the front bench. Key to iTnews readers is whether the new leader - who put her hand in unopposed - will make any changes to the Communications (DBCDE) and Finance portfolios, joint stakeholders in the National Broadband Network (NBN).

Currently these portfolios are held by Senator Stephen Conroy - a strong ally of Kevin Rudd, and Lindsay Tanner.

"I will be voting for Julia Gillard in the l'ship ballot. She will be an inspiring PM!"

Alongside the NBN, Finance Minister Lindsay Tanner was the architect of cost-cutting measures within government agencies that took a dramatic effect on IT spending in Canberra.

Senator Conroy, meanwhile, would more likely to be remembered as the architect of the controversial plan to filter the internet should he lose his portfolio.