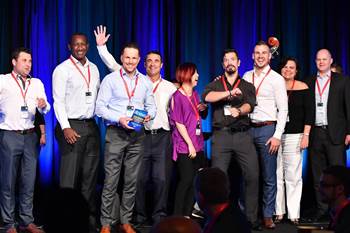 Named media IT project of the year in Benchmark Awards.

Nine's reinvention of how audience figures are projected has scored the company the trophy for best media/telco IT project of the year in the iTnews Benchmark Awards.

Heavily manual processes have long been relied on in TV land to set rates and sell advertising slots, with projected audience figures based on educated guesses.

The platform quickly proved to be 20 percent more accurate than the manual methods - which could translate to millions of dollars saved per year in money that would have previously been refunded to advertisers when viewership didn't meet predictions.

It has also given Nine the opportunity to better commercialise its fast-growing video-on-demand business through improved modelling of projected audiences.

"This has been a magnificent achievement for our business, and I would just like to thank Mat [Yelavich, CIO] for the outstanding team assembled to deliver this project," Nine sales operations manager Warrick Sharp said.

"It's just been an incredible success for our business and great driver of our revenue. Thank you.”

You can read more about Nine's work alongside the other winning projects in the iTnews Benchmark Awards 2018 special edition report.