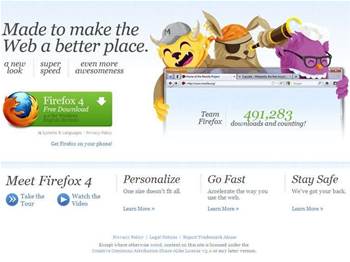 Mozilla has announced that Firefox 4 is finally ready to download, after a prolonged testing process that has dragged on since last November.

According to Mozilla, the update should provide faster browsing, improved privacy and better synchronisation between computers.

Mozilla claims Firefox 4 is up to six times faster than the previous release, with the developer promising improved start-up and page load times, plus hardware accelerated graphics.

Consumers that are concerned about their privacy are also catered for, with Mozilla boasting a “Do not track” tool to block behavioural advertising.

The browser has gone through 12 versions of beta tests and was initially expected to be launch five months ago.

It had been downloaded over 1.16 million times at the time of publication.

Got a news tip for our journalists? Share it with us anonymously here.
Copyright © Alphr, Dennis Publishing
Tags:
4finallyfirefoxreadyrollsoftwareto