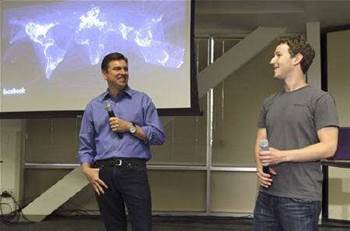 Turns up the heat on battle with Google.

Facebook will integrate Skype video chat into its social networking service, striking a deal to cement its role as a hub for communications.

The agreement, announced by Facebook Chief Executive Mark Zuckerberg at the company's Palo Alto, California, headquarters on Wednesday, deepens its cooperation with Microsoft, which is in the process of acquiring Skype for US$8.5 billion.

Zuckerberg said Facebook now has 750 million users. The new service, rolling out from on Wednesday, could be a huge boost for Skype, which currently has about 145 million regular users.

"This is opening up a whole new user base for Skype," said Kim Caughey Forrest, senior analyst at Fort Pitt Capital Group. "The core of Skype users are people that have extraordinary circumstances -- they have a computer but no money, or they have friends and family on a different continent."

Facebook, which also unveiled a group messaging function, adding to its existing one-to-one text chat, is striking back at Google, which last week turned up the competitive heat by introducing a social networking service dubbed Google+.

While many of Google+'s social networking features are similar to those already available on Facebook, Google has attracted praise for its videoconferencing function, which allows up to 10 people on the service to participate in a video call.

Facebook's new offering, which initially is limited to one-to-one video chat, could benefit Microsoft, which owns 1.6 percent of Facebook and announced its purchase of Skype in May.

The world's largest software company is trying to muscle in on Google's turf with its Bing search engine, and is hoping Skype will help it broaden its portfolio of Web-based properties.

Skype, which was founded in 2003, allows people to make Internet phone calls and video calls at no charge and has also developed premium services.