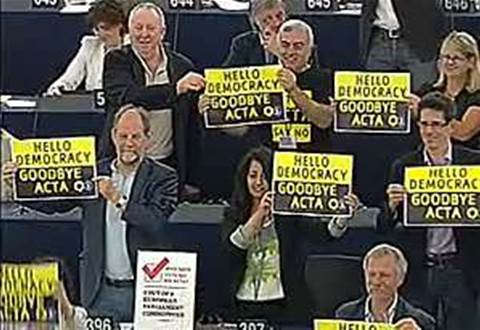 The treaty, which had faced rejection from five separate European Union trade committees ahead of the plenary vote on Wednesday, was voted down by 478 votes to 39 in a final meeting on the issue.

“It’s time to give ACTA its last rites," said David Martin, UK member of the European Parliament and a key opponent of the treaty.

"It’s time to let its friends time to morn and for the rest of us to get on with our lives."

The decision not to ratify the treaty was one of four the Parliament was expected to consider in the plenary vote. But the result was widely expected after no European representatives issued intentions to press its ratification.

However proponents of the treaty have still pushed for a further legal opinion from the European Court of Justice on whether ACTA is compatible with existing European treaties.

The treaty, which proposes to make changes to international intellectual property and trade law, has received wide criticism from a number of sectors and governments globally. Several European governments had previously indicated disdain for ACTA's provisions.

The decision was received with relief by several industry and community representatives in Australia, where the Department of Foreign Affairs and Trade has continued to play down the effects ACTA would have on existing intellectual property legislation or business practices locally.

However, a parliamentary committee inquiring into the treaty last week recommended Australia obstain from ratifying the agreement until the Government provided more clarifications around the treaty, and an inquiry into copyright reform was completed toward the end of next year.

“The EU vote signals concern we've seen in other quarters that a punitive approach based on mere allegation will not wash with the internet community," Peter Coroneos, co-founder and former Internet Industry Association chief executive, told iTnews.

"Internet intermediaries, Iike ISPs and content hosts are happy to comply with directions under due legal process.”

He said the success or failure of treaties lay in how it approached regulation of market behaviours. The ACTA treaty, along with a similar agreement in the form of the Trans-Pacific Partnership, has been widely seen as an attempt by multi-nationals and the US Government to modify global market behaviours through a trade agreement.

“They have to show through words and deeds that this isn't the case," Coroneos said.

"Being an advanced digital economy implies that your policy makers are savvy. I'm sure they've learned a lot from recent history, including ACTA.”

Tim Conway a public policy advisor for industry body the World Information Technology and Services Alliance, said his organisation supported efforts to stop creation of, and trade in, counterfeit goods and services.

However, such efforts were best addressed through well-established multilateral organisations, particularly the World Trade Organisation and the World Intellectual Property Organisation.

Australian Digital Alliance executive officer Ellen Broad said the EU’s rejection of ACTA made clear that a lack of transparency around negotiations could be fatal to its success, particularly where that treaty is seen to privilege particular, corporate interests over wider society.

She added the EU’s rejection of ACTA should pave the way for a more open, inclusive approach to international negotiations affecting copyright standard.

"If Australia is still promoting ACTA text in the face of these high-level, wide-spread criticisms, that’s incredibly disappointing," she said.