EU lawmakers seek to limit use of data by Internet firms 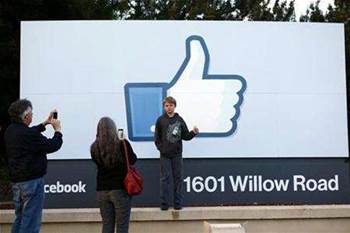 Xavier Schmidt of Menlo Park, has his picture taken by his parents outside Facebook's headquarters in Menlo Park, California, the night before the company's IPO launch, May 17, 2012. Credit: Reuters/Beck Diefenbach/Files

Internet companies such as Facebook and Google may have to get more permission to use information if European Union lawmakers give users more control over their personal data.

EU lawmakers want to limit companies' ability to use and sell data, such as internet browsing habits, to advertising companies, especially when people are unaware their data is being used in such a way.

"Users must be informed about what happens with their data," said Jan Philipp Albrecht, a German Member of the European Parliament who is driving the reform. "And they must be able to consciously agree to data processing - or reject it."

Facebook and Google, who were among the first to profit from users' data, have been lobbying against the curbs.

Other data-reliant sectors such as health services, rail and smart meter makers have also voiced concerns.

Albrecht, a Green politician, plans to announce on Wednesday a plan to make sure users of search engines and social networks can control how much of their data is sold to advertisers.

A report he produced, which was seen by Reuters, builds on a proposal announced by the European Commission last January for tougher data protection.

The European Parliament, the Commission and the bloc's 27 countries will seek an agreement on the rules in coming months.

Internet companies worry it will have a chilling effect on a thriving business.

"We are concerned that some aspects of the report do not support a flourishing European digital single market and the reality of innovation on the internet," Erika Mann, head of EU policy for Facebook, said.

The digital market was inescapably global in nature, and included important partners in the United States, she said.

The amount of online data collected and sold has grown rapidly. Currently, over 60 hours of YouTube content is uploaded every minute.

US privacy advocates estimate a Facebook user can make US$10 a year for the company by clicking on ads. At last count, the company said it had over 1 billion users.

Albrecht also said national authorities might be allowed to levy fines ranging from 0.5-2.0 percent of annual turnover for compromising customer data — which could mean losing or divulging the data.

However, high-ranking politicians in the European parliament are lobbying for the maximum fine to be no more than 1 percent of turnover, saying anything higher could push big data offshore. Albrecht's final report will voted on in April.

The push to regulate use of customer data comes as consumers appear to be turning against the practice. In December, image-editing and hosting application Instagram dropped an idea to sell users' photos to advertisers after it lost almost a quarter of its users within a week of announcing the plan.

"They may do so if they feel that their reasons for doing so are more compelling than the individual's right to privacy," said Joe McNamee, a privacy advocate in Brussels.

Albrecht said there would be exceptions in his proposed curbs. For example, a company would still be able to send junk mail to a user based on data it had gathered itself.