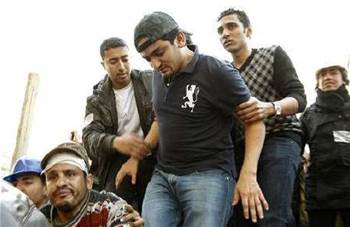 Governments may see Google as a threat.

A Google executive who has become a hero of the Egyptian revolution is public relations gold for the Internet power, but analysts say the company must be careful not to overplay its hand.

Google marketing executive Wael Ghonim became the public face of the uprising that led to President Hosni Mubarak handing power to the army on Friday.

Ghonim was detained by security forces and came out swinging on his release, calling for Mubarak to step down.

When internet access was shut down during an early phase of the Egyptian protests, Google engineers hacked together a way to allow Egyptians to use Twitter by dialing a phone number and leaving a voicemail message.

Despite its association with the events in Egypt, Google has not commented on the politics of the country's upheaval.

Instead, it has focused on values surrounding freedom of information and the internet. "We're incredibly proud to see Googlers take a stand on those issues," spokeswoman Jill Hazelbaker said on Friday, when asked about Ghonim.

That has played well for the company.

"This is going to get Google some positive publicity," said Rosabeth Kanter, a professor at Harvard Business School. But she added, "They have to be careful."

Consumers and businesses would love the tools for communication that Google supports and provides -- but less democratic governments might see Google as a threat.

"Google will not be their search engine of choice," she said. "You're going there to sell products and services, you're not going there to topple the regime."

Ghonim's ties to Google and the internet have become part of his appeal.

"I always said that if you want to liberate a society, just give them the internet," Ghonim said in an interview on CNN on Friday.

He helped create a Facebook page devoted to a victim of police brutality that helped spark the uprisings.

Internet tools, particularly social networking services like Facebook and Twitter, have been credited with playing an important role in the Egyptian uprising, helping protesters organize and communicate.

"Had he been an executive for Philip Morris or something, I don't think it would have been as big a part of the story," said Hani Sabra, an analyst who focuses on the Middle East and Africa at the Eurasia Group.

Google has made irregular progress toward its goal of "Don't be Evil," some say.

It took a public stand against internet censorship in China. It partially withdrew from mainland China last year, redirecting Web surfers to a Hong Kong site.

But it had operated in China and self-censored its search results for several years before that and it left some business in China after relocating its search service to Hong Kong.

"They're not a company that is consistent in terms of how they do business in the world in terms of a value standpoint," said Paul Argenti, a professor of corporate communication at Dartmouth's Tuck School of Business.

Ghonim himself credits another Internet company for the ousting of Mubarak.

"This revolution started on Facebook," he told CNN, adding, "I want to meet (founder) Mark Zuckerberg someday and thank him."