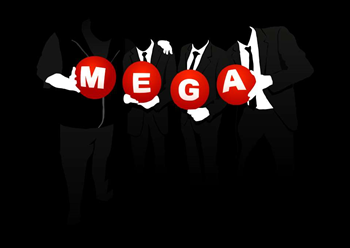 "We will deploy a more resilient SSL root cluster this week," van der Kolk said, when asked what measures Mega will take to mitigate future denial of service attacks.

Van der Kolk did not name a source for the attack, but wasn't surprised at Mega being targeted.

"We were surprised that despite our relatively high profile, the situation was very calm after launch," van der Kolk said. The site is now back up."

"Mega is now pushing more than all of NZ, but of course mostly from Europe so no big deal — it would if we pushed all of our traffic from NZ," van der Kolk said, taking a swipe at the country's international data charges which are some 20 times higher than in Europe.

Cisco's most recent Visual Networking Index measured the amount of monthly Internet traffic in New Zealand at 66 petabytes, estimated to hit 81 petabytes by this year.

In comparison, the figure for Australia for 2012 was 343 petabytes a month which is expected to grow to 418 petabyte this year, with a 17 percent annual compounded growth rate according to Cisco.

Along with Mathias Ortman, Kim Dotcom and Finn Batato, van der Kolk are out on bail, awaiting an extradition hearing in New Zealand to decide whether or not they should be handed over to the United States, to face trial on secondary copyright infringement charges.

The case against the Megaupload four has been ongoing since a dramatic police raid on Dotcom's Coatesville, Auckland mansion in January 2012 during which the police arrested the filesharing tycoons and seized their assets and data.

NZ and US authorities continue to pursue the case despite suffering several legal setbacks as the Megaupload legal wins judicial review battles.

In the latest victory, the New Zealand Police and the US Federal Bureau of Investigation were ordered by a High Court judge to return assets and data to Dotcom as the warrants used to seize them were invalid.