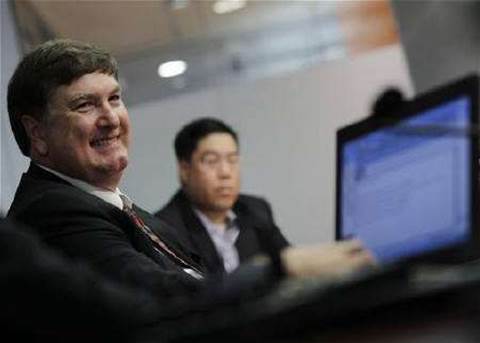 Stumps up the cash to make it happen.

Dell, which is seeing renewed investor optimism after blowout quarterly profits, is on the hunt for companies with valuations in the US$1 billion to US$5 billion range that can help it be a one-stop shop for corporate IT needs.

The No. 2 PC maker has been fairly active in the M&A space, snapping up about eight companies in its last fiscal year, including information-security company SecureWorks.

The pace is a big change from a decade ago, when the company was absent from the M&A market.

"We have the financial capacity to do many deals," Johnson said. "SecureWorks is indicative of the type of companies that you will see Dell acquire."

Dell, which spent around US$2 billion for acquisitions last year, had US$15.2 billion in cash and investments at the end of April.

That compares with US$12.8 billion at larger rival Hewlett-Packard, which is also actively looking to shore up expertise in much of the same areas that Dell is targeting, including services, storage and security.

HP outbid Dell for Silicon Valley firm 3PAR last September after a fierce bidding war, with a final offer that valued the small, data storage provider at US$2.4 billion.

Among the technology giants that have aggressively acquired cloud-based companies last year, Dell has often been described as lagging behind its peers including HP, Oracle and EMC .

In December, Dell bought smaller storage company Compellent Technologies, after 3PAR and Isilon were sold to HP and EMC respectively.

Johnson said Dell's decision to let go of 3PAR was a prudent one as the valuation of the company exceeded the assets at that point.

"Relative to 3PAR, that wasn't a capital issue. That was a valuation issue," Johnson said.

Some analysts have criticised HP for overpaying for 3PAR, noting its US$33-per-share offer valued the company at more than eight times sales. Dell's first official offer in August was US$18 per share.