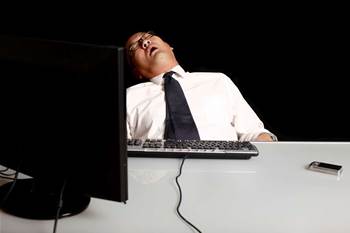 The film industry lead barrister has accused iiNet's legal team of trying to win time for "beauty sleep" by requesting the case be adjourned until Friday mid-morning.

The studios wrapped up almost two days of closing submissions today which the presiding Justice Cowdroy described as "voluminous".

iiNet's lead barrister Richard Cobden told the court his legal team had "considered as much of the material as they were able to" since receiving it yesterday.

"Perhaps in hindsight it would have been better in February or March to set time for evidence and then set some clear time off to have a proper exchange of [closing] submissions," Cobden told the court.

"We will need to adjourn until 11am on Friday to enable us to have at least one clear day to work on the [closing submissions] document."

But the suggestion raised the ire of the film industry's barrister Tony Bannon.

"We submit my learned friend should start tomorrow," Bannon responded.

"We haven't been lulling around in the sun from nine-til-five. Sleep has not been on the agenda in the last few days and that's expected in a case like this.

"We expect they shouldn't get their beauty sleep either."

Bannon submitted a full day off was "rather extravagant".

But Justice Cowdroy said he didn't "think one day was going to make much difference in the long run", albeit that he thought it "imperative that [the] case should not be fragmented more than necessary" as it shaped to run over the course of extra days reserved for hearings in the next fortnight.

It was expected Cobden's closing submissions would run into Thursday 19th November and potentially into Wednesday 25th November, currently the final day of scheduled hearings in the copyright case.

Barristers for both sides were expected to discuss the possibility of adding another day - either the 24th or 26th - to proceedings between themselves before making a submission to the Federal Court.

The case was adjourned until Friday at 11am AEST. You can follow the case in-full here. For a background on the case, click here.