CUA to open iM app to Android users within weeks 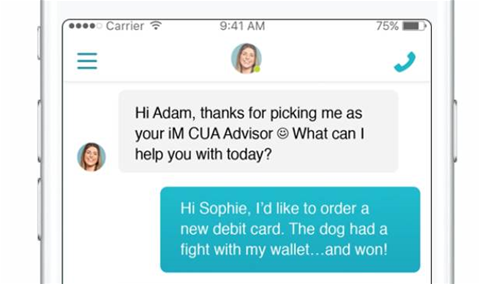 After iOS only trial netted $11.3m in new loans.

Credit Union Australia has revealed that pilot users of its so far iOS-only iM CUA app have already take out $11.6 million in new loans through the chat platform.

CEO Rob Goudswaard said in a LinkedIn post that the pilot “with 2467 Apple iPhone users over the past nine months” had been judged a success and would now be expanded.

“[It] resulted in a net promoter score of 53 amongst pilot users and $11.6 million in new lending,” Goudswaard said.

“We’re now preparing to relaunch the app in the coming weeks, making it available to all CUA members on compatible Apple and Android devices.”

Through iM CUA, customers are able to choose a “personal banker” that they can then interact with on an ongoing basis via instant messenger or video chat.

“The really exciting part is that your personal banker is the same person every time, meaning they get to know you personally, using a digital channel,” Goudswaard said.

“The app uses the member’s online banking credentials to log them in, and once digitally verified, they can then interact at a one-on-one human level with their personal banker.”

iM CUA was born out of CUA's “first year of being part of global banking collaboration Pivotus”, CUA said in its annual report.