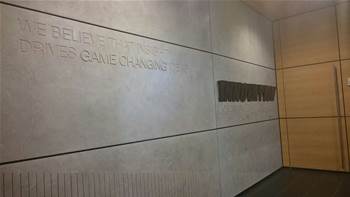 Still no launch date for Albert.

The Commonwealth Bank has opened a 690 square metre ‘innovation lab’ in its Sydney headquarters which aims to foster an internal culture of collaboration to deliver products to customers faster and more efficiently.

The interactive lab offers a number of collaboration and meeting rooms, as well as user experience zones for CommBank partners, staff and customers to learn about the bank's product offerings and gain data insights.

The 'collaboration hubs' are aimed at allowing CommBank staff to brainstorm, design and test new products and solutions; while adjacent 'usability zones' will house CommBank customers who are brought in to test the solutions.

Having the two functions in one location solves the problem of staff having to travel to various locations to test out prototypes, CommBank executive general manager of digital channel Lisa Frazier told iTnews.

Visitors to the innovation lab are handed an iPad, which interacts with iBeacons littered throughout the centre to tailor the service to the particular zone the customer is located in. The iPads also interact with digital whiteboards around the centre for collaboration.

The bank is also offering three Oculus Rift experience zones where CommBank customers and partners can act out in virtual reality a day in the life of a CommBank merchant or consumer customer.

For those more interested in analytics, the innovation lab provides access to a year's worth of the bank's aggregated data from two billion transactions to gain insights into shopping habits and trends within a nominated geography.

Innovation lab visitors are also able to learn in more detail about several of CommBank's solutions - currently its CommBiz online banking product; its eCommerce, Emmy, Leo and Albert merchant solutions; and its consumer CommBank app. Visitors can play with these tools via kiosks kitted out with Kinect technology.

CommBank CEO Ian Narev said the space would allow the bank to collaborate beyond individual teams.

"The point is not the specific technology, it's the idea of bringing two things together," he said. "Number one is our strategic focus of technology, and we've said for a long period of time that CBA needs to be leading-edge and to be able to apply leading-edge technology for our customers is a life and death matter," he said.

"It's not a nice thing to have, it's as core skill to have."

Admits to issues with Albert

The long-awaited launch of CommBank’s merchant tablet solution Albert is inching slowly closer to arrival after Narev today admitted the solution had taken longer than the bank expected.

But the bank has consistently declined to offer a launch date for the tablet, which has remained in testing since the initial announcement.

CommBank previously spoke of unexpected complexity with the build process, and today Narev admitted the solution had taken longer than first thought.

"When you're dealing with a leading-edge piece of hardware you cannot compromise security, it's absolutely paramount. Getting the security levels of the glass, for example, took longer than expected - and yet interestingly no-one has beaten us to the market. And when [Albert] is rolled out, it is still going to be market leading," he said.

New CommBank CIO David Whiteing said it was important for the bank to make mistakes along the way, recognise and learn from them to reap the earnings.

"With Albert, you're seeing us learning as we do it. We don't want to go to market with anything that's not quality. As much as we want to deliver, we don't want to do that without quality."

CommBank head of institutional banking and markets Kelly Bayer Rosmarin said Albert was expected to go into a larger pilot than the current field testing "in the next couple of months".

When it eventually launches, the device will come equipped with a standard set of CommBank apps, with merchants able to submit third-party applications of their own to the CommBank application store for use on their device.

The bank will include a split bill app, in which retailers can allow their customers to split their bills in chosen amounts; a cash count app for merchants to tally up their daily earnings, and an open tab app to keep track of customers wanting to add a transaction to their tab, among others.