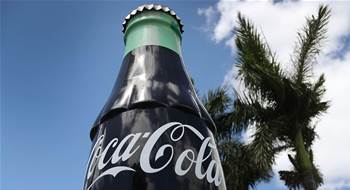 Coca-Cola Europacific Partners Australia has completed a “fundamental change” to the platforms that underpin its contact centre operations.

Business process and technology (BPT) collaboration solutions API lead Dave McDougall told the Genesys G-Summit Sydney that the new platform - comprising components from Genesys, Salesforce and others - was deployed in late 2021, after about a year of work.

BPT is the internal name for Coca-Cola’s IT function.

However, he said that the operations were relied on by businesses placing beverage orders, as well as by field sales teams and delivery drivers for support.

“A big part is about route optimisation, so ensuring that our customers who are going to have a delivery through their area in the coming days get the opportunity to place an order, and so we'll actually call ahead to try and encourage a purchase with those customers,” McDougall said.

McDougall didn’t say much about CCEP Australia’s previous contact centre platform, aside from it experiencing stability issues, including for laptop-bound users - presumably a nod to its applicability to a remote work scenario, as the project kicked off in October 2020 and ran through much of the pandemic.

McDougall said that the existing level of capability in the incumbent platform was seen as a “minimum requirement” for replication in the new platform.

However, he said there was more that the business wanted the ‘call centre of the future’ platform to be capable of, particularly from an outbound calling and data insights perspective.

The beverage maker used a design thinking approach for some of these newer aspects, working closely with the business to create capabilities to a “gold standard” level that were also designed around customer needs, whether the customer was internal or external.

McDougall said that in one instance, CCEP Australia used real-time insights about “call flow” - how a call is routed to resolution through a contact centre operation - to make adjustments to its interactive voice response (IVR) options for the vending machine part of its business.

“We were able to drive down call volumes 50 percent month on month by being able to look at the data that was coming out of the platform,” he said.

“We had to make changes based on the problems that customers were specifically having.”

McDougall saw further potential value to be gained from insights generated in Genesys, Salesforce “and the other tools that we use”.

He said these insights are being consolidated into a common reporting platform that the business could self-serve from.

In the past, he said, the business would need to ask IT or a vendor to produce custom reports to get at the same data.

McDougall added that change management and business buy-in were critical to the success of the project.

“This wasn't a small change,” he said.

“This was a fundamental change to the way our call centres worked day-to-day, to the tooling that they used and how they use it.

“It served [us well] to really have a strong change management plan and execute that.”