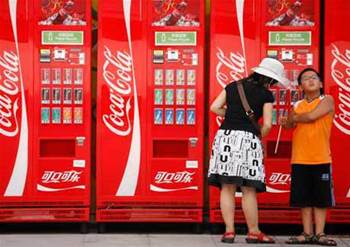 Since May, the company has migrated more than 4,000 users from its older Notes systems onto the hosted Exchange platform.

Users in regional areas and shared mailboxes for team collaboration are due for migration by the end of September. A total of almost 9,000 mailboxes are due to shift.

By shifting to Exchange, CCA has diversified from most other companies associated with Coca-Cola, where Notes remains the dominant email and collaboration tool.

CCA technology services manager Steven Meek said that the shift was designed to eliminate a complex set of tools used for collaboration (including WebEx and SharePoint as well as Notes) and to reduce the capital costs associated with ongoing upgrades to the Notes platform.

"To get from Lotus Notes 5 to 7 to 8 was a significant exercise," Meek said during a presentation at Microsoft's Tech Ed conference in Queensland. "Every two or three years we'd be spending a lot of money upgrading."

While the Singapore-hosted solution did not offer all the features CCA initially sought, the company concluded that the trade-off of not having to administer and secure remote email was worthwhile, especially given the rapid addition of new features on the BPOS platform.

"We decided that the functional gaps were something that we could tolerate," Meek said. "We're getting new functionality every 6-8 weeks That's far beyond what we could achieve internally."

"We have reached a stage where we've got two-thirds of our business running on this. We've had no performance complaints at all. I was concerned our network infrastructure wouldn't cope with thousands of people accessing that Singapore data centre. "

CCA is also consolidating its business management systems with SAP. Meek said the company hopes to make further use of SAP's Duet technology developed with Microsoft once the email migration is complete.

"We are keen to look at how we can integrate SAP and Microsoft moving forward as well."

CCA has not yet migrated its SharePoint operations, Meek said.

"We looked at SharePoint Online in BPOS and concluded it didn't come close to what we had in SharePoint today. We had a lot of customisation in SharePoint and replatforming that for online services wasn't going to be palatable."