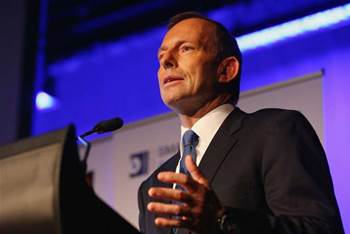 Tony Abbott, bidding to be Australia's next Prime Minister.

The Coalition has announced it would introduce a new whole-of-government IT leadership hierarchy if elected, giving the Department of Prime Minister and Cabinet the ultimate say on IT decisions.

The Coalition’s policy for ICT, released today, would elevate the status of the Australian Government Information Management Office (AGIMO) to an advisory body to the Department of Prime Minister and Cabinet, even though it remains a function within the Department of Finance.

The PMC would ultimately decide on IT policy using advice from both AGIMO and the Secretaries’ ICT Governance Board (SIGB).

The SIGB is made up of secretaries from a number of agencies including Defence, the Attorney-General's Department, DBCDE and DIAC. The Departments of Finance and the PMC are permanent members of the board.

Under a Coalition Government, AGIMO would also serve as a “support agency” for an Australian Government ICT Advisory Board, which would be made up of members of the private sector and would provide advice to Cabinet, agency CIOs, AGIMO and the SIGB.

The Coalition's ICT policy document criticised the current state of IT responsibilities as not delivering the “common standards, sharing, productivity, innovation or agility” required.

“Agencies remain largely autonomous, and able to opt out of whole-of-government initiative," it read. "AGIMO’s combining of ICT strategy and policy expertise with an operational role in procurement and centrally provisioned IT services satisfied neither function – and it has since split into  separate strategy and procurement arms.

“With accountability for compliance with whole-of-government objectives unclear, the result has been continued duplication and fragmentation of vendors, strategies and priorities.”

A spokesperson for Shadow Communications Minister Malcolm Turnbull said at present, “SIGB basically ticks off on projects, but there is no recurrent analysis".

"They are then lost to the ether and we don’t get the analysis of how the project ran, whether it met its objective and how it could have been done more effectively."

The spokesperson said the Coalition plan would not require a refresh of IT expertise within the PMC, which boasts "more important" rigours around auditing and accounting.

"We're confident that capability is already there," he said.

The new state of IT governance would still require the Department of Finance to have a “critical oversight role coordinating common procurement panels, standards and contracts; purchasing and managing centrally delivered services; participating in gateway and major project reviews; monitoring and analysing technical and financial data about ICT across the APS; and auditing ICT.”

The Coalition would task Finance and AGIMO with review and audit all IT spending, capex and outcomes over the last three years.

As previously reported by iTnews, a Coalition government would also push for a cloud-first policy which it believes would “eliminate duplicated, fragmented and sub-scale activities across agencies.”

Agencies that are the largest users of IT, such as Defence and Human Services, would retain control and autonomy over internal IT, but trade this off against a requirement  to provide three-year investment plans to Finance and AGIMO which would need to be regularly updated.

Large IT projects would be subject to external reviews for every six months until the project is complete, and a dashboard - similar to that just announced by the Queensland Government - would be introduced to make key metrics on major Government IT projects public.

A Coalition Government would also trial moving critical data to a private government cloud arrangement from 2014.