Clinton to lay out US internet freedom plan 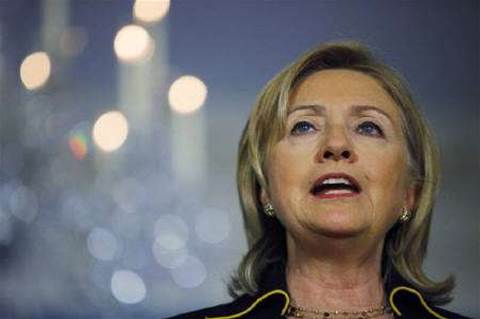 Secretary of State Hillary Clinton will unveil a new U.S. push for global Internet freedoms on Tuesday, citing Internet-fired protests in Egypt and Iran as examples of how new technologies can spark political transformation.

Clinton, making her second major address on Internet policy amid growing evidence of how communications technologies can transform politics around the globe, will underscore U.S. commitments to a free, open and secure Internet, the State Department said on Monday, releasing excerpts of her speech.

"There is a debate underway in some circles about whether the Internet is a force for liberation or repression. But as the events in Iran, Egypt and elsewhere have shown, that debate is largely beside the point," one excerpt of Clinton's speech says.

"What matters is what people who go online do there, and what principles should guide us as we come together in cyberspace. That question becomes more urgent every day," Clinton will say, according to the excerpts of her address.

Under Clinton, the U.S. State Department has pushed Internet freedom as a basic human right, although it has also struggled with the consequences as it seeks to control the damage wrought by the WikiLeaks release of classified U.S. diplomatic cables.

Clinton has condemned the WikiLeaks releases, saying they are based on stolen information that threatens both U.S. security as well as the wellbeing of confidential sources including human rights activists and others cited in the cable traffic.

But she has also strongly defended the basic value of a free Internet, saying social networking sites such as Twitter and Facebook can give voice to people's aspirations as seen in protests in Tunisia, Egypt, Iran and elsewhere.

The State Department, previewing Clinton's speech at a Washington, D.C. university on Tuesday, said she would "reaffirm U.S. support for a free and open Internet and underscore the importance of safeguarding both liberty and security, transparency and confidentiality, and freedom of expression and tolerance."

"Our allegiance to the rule of law does not dissipate in cyberspace. Neither does our commitment to protecting civil liberties and human rights," Clinton will say, according to the speech excerpts.

Clinton has made Internet freedom a central plank of U.S. foreign policy, and last year called efforts by some governments to control their citizens' access to the Internet as "the modern day equivalent of the Berlin Wall."

The forceful U.S. stance on the Internet has led to friction with China and other countries, which the United States has accused of hacking and censorship in an attempt to control the flow of information.

Along with China, Clinton has cited Iran, Saudi Arabia and Egypt among countries that censored the Internet or harassed bloggers -- and in Egypt and Iran, opposition protests have been fueled in part by new Internet technologies that allow people to organise.

The clash over the Internet was thrown into stark relief last year when search giant Google threatened to quit China's market amid charges of hacking and censorship, although it later devised a work-around that it said both complied with Chinese law and its own pledge to allow users broad access to the Internet.

Clinton, who has directed the State Department to work on ways to broaden global Internet access and prevent authoritarian governments from using the technology to suppress dissent, will underscore that there is no turning back from the increasingly networked society.

"History has shown us that repression often sows the seeds for revolution down the road. Those who clamp down on Internet freedom may be able to hold back the full impact of their people's yearnings for a while, but not forever," her speech says.