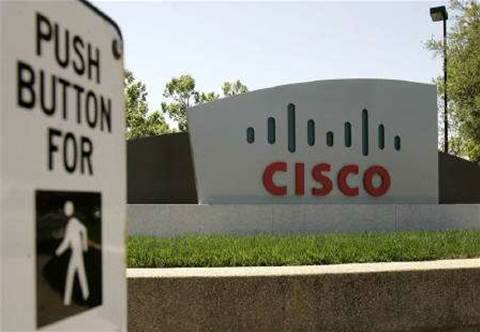 Cisco shares fell 10 percent after hours on Wednesday. Shares of peers such as Juniper Networks, F5 Networks and Riverbed also declined, but the recurring let-downs raised questions about whether Cisco is still the industry bellwether it once was.

Chambers upset investors last August with a warning of "unusual uncertainty," and followed up last quarter with a weaker-than-expected outlook that he blamed on weak orders from debt-burdened government agencies.

He offered no relief this quarter.

"Unfortunately, we believe that our concerns in the public sector will continue to be challenging in the developed world for the next several quarters," he said, adding that Cisco's government accounts in the United States, Europe and Japan had all been hit in the fiscal second quarter.

"The challenges at state, local, and eventually federal level in our opinion will worsen over the next several quarters," he said of the US market.

Chambers is one of Silicon Valley's longest-serving executives, and investors take his views on industry trends seriously. He was one of the first tech executives to flag the impact of the financial crisis on the sector in late 2007.

Investors have also looked to Cisco for signs of overall technology spending due to the breadth of its customer base, which ranges from small US businesses to foreign governments.

Cisco's second-quarter gross margin fell to 62.4 percent from 64.3 percent in the previous quarter, raising analysts' concerns that growing competition may be forcing the company to cut prices to protect market share.

The company forecast margins to be around 62 to 63 percent for the rest of the fiscal year, which ends in July.

Cisco also let down investors with a third-quarter outlook of earnings excluding items of 35 cents to 38 cents per share, below Wall Street expectations for 40 cents. And it said sales growth for the full year would likely be at the mid- to low-end of a previous 9 to 12 percent outlook.

Analysts said the outlook and low margins, a signal it may be cutting prices in response to tough pressure from competitors like Hewlett-Packard Co, overshadowed stronger-than-expected results for the second quarter.

Revenue for the quarter ended Jan. 29 rose 6 percent from a year earlier to US$10.41 billion. Analysts had expected US$10.23 billion, according to Thomson Reuters I/B/E/S.

Quarterly net profit fell to US$1.5 billion from US$1.9 billion a year earlier.

"The results were a little bit better than expected on the top line and also better on the bottom with some help from a better tax rate. However, investors are looking at the gross margins, which declined sequentially," said RBC Capital Markets analyst Mark Sue.

Chambers pledged to form a working group to improve margins and safeguard against market share erosion. He said the poor performance was partly due to the company "transitioning" to new products.

"I think that's a way to cover up that they are facing competition in their more mature business lines and that they are most likely going to use price as a weapon to hold market share, and this is going to pressure earnings and margins," said Channing Smith, managing director and co-manager of Capital Advisors.

In addition to longtime industry rivals like Juniper and Alcatel-Lucent, Cisco faces new ones such as China's Huawei and from HP.

Cisco and HP used to be resale partners, but turned rivals after Cisco in 2009 unveiled plans to enter HP's territory of data center servers. HP in turn challenged Cisco by buying network equipment maker 3Com for around $3 billion.

Both sides have lately been raising the stakes with discounts, zero-interest leasing and pay-later schemes.

Despite the sell-off, some investors said Cisco was still a solid bet in the long run. While the past few years have shown the company to be more vulnerable to economic trends than previously thought, its switches and routers are critical to growing Internet and mobile traffic.

"We believe long-term investors should ride out the storm. If your time-frame is longer than the next six months, we believe Cisco's growth opportunities rival that of Apple and Google," said Smith.