CIOs kept out of merger talks 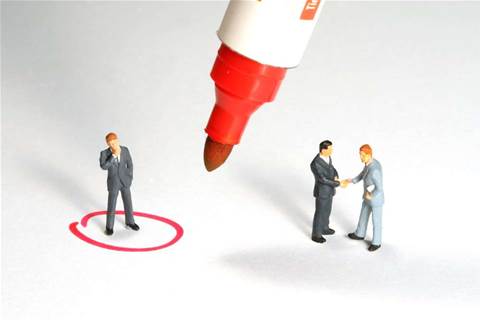 Left to integrate systems without input.

Over one in three internal legal chiefs never think to engage the chief information officer in merger and acquisition projects, according to a joint survey by Gartner and ALM.

The survey, conducted late last year, shows the impact that regularly scheduled discussions between the internal legal team and the CIO can have on legal strategy and corporate policy-setting.

Despite the role of IT in systems integration following a merger or acquisition, 39 percent of chief legal officers said they did not involve the CIO in such projects.

"Too often, the CIO is left to integrate IT systems after a merger has happened, which frequently results in delays, frustration, less-than-optimal results and extended time to value - the time it takes the enterprise to realise the benefits of a merger - which is an important key performance indicator in M&As," Gartner noted in a research report.

"The CIO needs to be engaged in any M&A project during the planning stage in order to offer insights and advice on how to smoothly integrate any new IT systems, and retire or consolidate redundant systems".

Gartner said that increased involvement of the CIO could help improve the success rate of merger and acquisition projects.

More broadly, the survey noted that over three-quarters of legal officers that met with the CIO more than once a month had changed their legal strategies based on the meetings.

In addition, 82 percent of legal officers changed corporate policies "after conferring with the CIO".

Those who limited CIO engagement to once a month - or less - were far less likely to enact policy or strategic shifts.

The survey found 51 percent of legal officers limited contact with the CIO to "once a month at most". This was a major limiting factor in IT helping shape legal policy decisions, and also in the general satisfaction of the legal team with IT and the services it provided.

"It is clear that maintaining a high level of communication between the [chief legal officer] and CIO is a main ingredient of the legal department's IT investment, and its satisfaction with the services IT provides," Gartner vice president Debra Logan said.

Legal respondents to the survey also called for IT to be more knowledgeable of specific legal IT solutions, which may include e-discovery and litigation support.