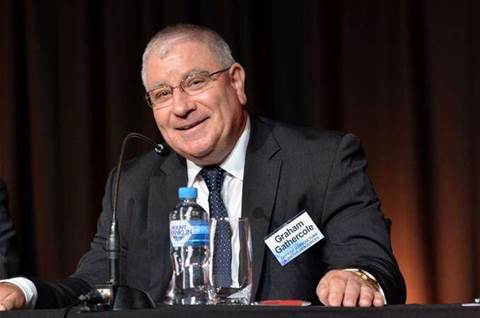 Agriculture tech chief reflects on a long career in IT.

Long-time Canberra IT boss Graham Gathercole will work his last day at the Department of Agriculture on Monday, before settling into a hard-earned retirement.

The Australian public service veteran has spent the past five years as CIO at the Agriculture department, which is charged with securing the nation’s import and export operations from biological threats.

Prior to that, Gathercole worked as CIO at Medicare until it was merged into the Department of Human Services in 2009, and he took charge of the full DHS IT infrastructure as a key deputy to CIO John Wadeson.

He learnt much of his trade working at the Defence Signals Directorate throughout the 90s.

Gathercole told iTnews his proudest achievements include the transformation of Medicare from “manual processes to streamlined online processing,” the subsequent successful consolidation of the agency’s IT into the restructured DHS IT behemoth, and most recently the stabilisation of Agriculture's IT platforms and the deployment of Windows 8 tablets across the workforce.

“The department lost 160 hours to IT outages over a three year period,” he said.

“Our legacy is that this is now down to no more than one outage a year.”

His tablet-based mobility push earned him a finalist spot in the government category of the last iTnews Benchmark Awards. The initiative saw day-long paperwork processes cut down to 15 minutes.

The Department of Agriculture has already begun taking applications to find a replacement CIO who can continue its service delivery modernisation in Gathercole’s place.

“The role is required to deliver ICT solutions that efficiently and effectively enhance departmental capability, with particular regard to enhanced online service delivery,” the job ad states.

“Required technical expertise includes the ability to continue the transition from legacy systems to a more modern, integrated IT platform and to work in a shared services environment, and manage complex vendor relationships and contractual arrangements.”

The successful candidate will answer to deputy secretary Jo Evans, and will assume a seat on the DAWR executive management committee.