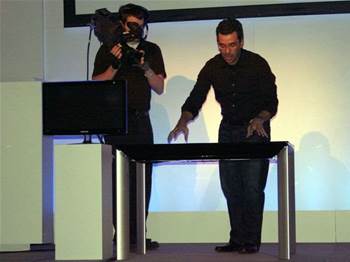 Now a thin slab of glass.

Microsoft has shown off a much slimmer, next-generation version of its Surface touchscreen technology.

At an invite-only press event at CES in Las Vegas, the company briefly demonstrated the revamped Surface, which sees the deep cabinet design of the past replaced with a thin slab of glass.

The first-generation Surface used cameras mounted beneath the screen to detect users' hand movements and objects placed on the screen. "This [new Surface] uses pixel-sense technology, where every pixel is used as a camera," explained Michael Angiulo, corporate vice president at Microsoft.

"Because it is so thin you can have it mounted vertically," Angiulo added. "You're going to see Surface in a lot of cool new places this year."

Despite the delicate new design, Microsoft was keen to emphasise that its new Surface was sufficiently robust for the bars, restaurants and shop stores that it's designed for. "You could drop a beer bottle on this from 18 inches without breaking the screen," Angiulo claimed, before urging attendees not to try that themselves.

Got a news tip for our journalists? Share it with us anonymously here.
Copyright © Alphr, Dennis Publishing
Tags:
cesglasshardwaremicrosoftsurfacethin