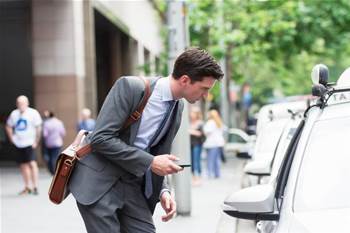 The days of clients and employees stashing a corporate Cabcharge voucher for a sneaky taxi home from the pub are numbered. And you can blame Google.

A new hook-up between the veteran Australian payments platform that started from a greasy garage in Surry Hills and the monolith of Mountain View is primed to rein-in taxi ticket misuse, while opening the door to the mass distribution of far more tightly controlled payments.

Cabcharge announced on Thursday it has ported its digital pass system onto Google Pay, a move that allows Android device customers pay for trips via vouchers ported to their phones, usually by email.

A similar service has been available for Apple’s iOS for a while, but what's less clear is how Apple’s stoush with three of the Big Four banks has affected take-up.

The distribution of digital Cabcharge eTickets direct to phones is a big deal for corporates and government agencies because it allows them to set strict limits around the time and value of voucher payments that have, for decades, been craftily upcycled for extra-curricular purposes.

It means that companies can issue non-transferable eTickets to selected users and set specific time and value limits. For example, a voucher for a fare back from an event could be issued at the end of a night to a set value of $50, or even $20 if the employer or host is particularly stingy.

It could also conceivably be geo-locked, for example only being authorized for use in a set city or town, though this isn't being promoted as a feature.

Your Cabcharge might also turn into a pumpkin at midnight if the issuer so decrees, which does raise the obvious question of what happens if you’re in the cab when the clock strikes twelve, you’re stuck in traffic or just waiting in a long queue.

Cabcharge is heavily pumping the convenience, control and intelligence features of the new service that will also send those handing out "cabbage" a useful synopsis of when and where you travelled.

Which is either an administrative godsend or a privacy problem in the making, depending on how you roll.

“Journey information is captured by the organisation issuing the Digital Pass, so corporate travellers don’t need to worry about claiming receipts and managing expenses,” Cabcharge said.

Cabcharge’s head of corporate accounts Todd Shipp said that research had “found the top frustration for corporate travellers is collecting and expensing receipts”.

“This practice is outdated, yet still occurs in more than half of businesses throughout Australia”, he said.

Unless all the inconvenience, time consuming paperwork and unfathomable cost centre codes act as a deterrent to claiming at all. But only a cynic would say that.

And while the utility of the new service is clear, there are some fairly obvious swings and roundabouts issuers are likely to face.

One is whether set limits on transactions amounts will create a rounding out effect, where the full amount of the ticket value is claimed. Ask yourself if you’d underspend a $20 or $30 food and beverage voucher from Qantas when your plane is delayed.

Another is whether set limits will alter driver behaviour if they are told the voucher is only valid to a certain amount. They could be well-tipped or short changed, depending on the run.

For some employers, especially those who use casual, relief and on-call staff, phone-based vouchers could be a boon because they can be sent over the air.

For nurses, hospitality staff and essential services workers that could make the difference between taking an extra shift or doing some overtime if some travel money can be sent straight to a phone.

It could also, in theory, save public transport providers substantial money for lightly frequented services if cabs could be rolled instead of buses or trains for shorter on-demand trips.

The taxi money innovation also reflects an effort by both Cabcharge and struggling wider taxi industry to keep sandbagging against Uber.

Today, Cabcharge says it’s is embracing change as the future.

“This rollout showcases the continual commitment Cabcharge has made towards payment innovation, following the launch of Digital Pass on iOS in July and the recently ACCC approved purchase of Mobile Technologies International (MTI),” the company said.