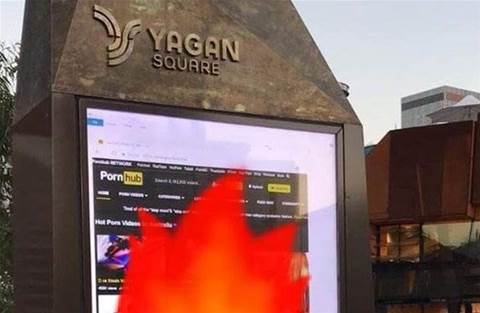 A touchscreen in Perth’s Yagan Square that was changed to show pornography had an open internet browser that could be accessed by anyone passing by.

The Square’s operator, the Metropolitan Redevelopment Authority (MRA), said late Friday that a “software malfunction” on one of two digital displays in the square meant the device’s browser had not been locked down.

“Early investigations indicate a software malfunction has allowed an internet browser to be accessed via the touchscreens,” an MRA spokesperson said.

“It appears the content was manually loaded by a member of the public.

The agency also said that only one of two identical displays in the Square had been affected, though both have been switched off until further notice.

“The screens will remain turned off until the investigation is complete and the MRA is absolutely assured that this will not happen again,” the spokesperson said.

“The contractors involved have been instructed to undertake a full investigation and provide a comprehensive report on the incident and ICT setup of the screens.”

The MRA said it would take “necessary action” against the ICT contractor that had installed and configured the display "if there has been a contractor performance issue".

Likewise, it also did not rule out involving WA Police if any aspect of the incident was deemed to have contravened criminal laws.